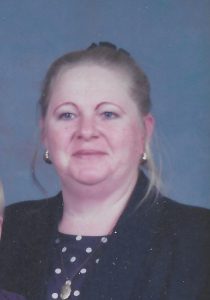 Doris “Dee” Arlene Badberg, 70, of rural Humboldt, Nebraska was born in Humboldt, Nebraska on January 16, 1952, to Claude Orval and Mildred Irene (Schuetz) Glathar. Doris grew up on the family farm northeast of Humboldt in Richardson County and attended Southeast Nebraska Consolidated School in Stella, Nebraska where she graduated in 1970. Doris lived in Auburn and Falls City and near Verdon and Humboldt.

On July 22, 1987, Doris was united in marriage to Raymond Badberg at their farm home near Verdon, Nebraska. To this union, a son, Brandon was born. Doris worked at the Nemaha County Hospital as well as with the EMT services for Nemaha County.

Dee then found a love for designing floral arrangements, for all sorts of occasions. She worked as a florist in Auburn, Falls City-Milam’s, and lastly at Bill and Betty French’s Flower Shop in Hiawatha, Kansas. Doris was baptized and confirmed at Pleasant View Methodist Church. She then became a proud member of the United Methodist Church in Humboldt.

Her days were spent with the love of her life Raymond, working in the yard and garden at their farm in Verdon and then in Humboldt. Doris and her family entered many exhibits at the Richardson County Fair throughout the years. The watermelons they grew were enjoyed by family, friends, and neighbors. Doris and Raymond truly enjoyed sharing produce from their garden.

Doris enjoyed spending time with her family and friends. She was so proud of the relationships she had with Ray’s children: Terrie, Tim and Troy. Doris was truly proud of her son, Brandon and the accomplishments that he has made, aided by the lessons she taught him. She got to experience the most rewarding gift of all being a grandmother to all of the grandchildren from Ray’s children and her own son, Brandon. Doris simply looked forward to the morning calls from Brandon and her granddaughters: Rilynn, Taytum and the newest addition Oakleigh.

Doris passed away at Bryan East Hospital in Lincoln, Nebraska on Sunday, December 18, 2022, having reached the age of seventy years, eleven months, and two days.

Funeral Services will be held at 10:30 a.m. on Tuesday, December 27, 2022 at the United Methodist Church in Humboldt, Nebraska with Pastor Dorothy Smith officiating.  Interment will immediately follow services at the Humboldt Cemetery.

Memorials contributions may go to the family’s choice for later designation.