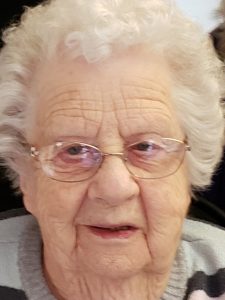 Marion Ellen (Friedly) Wittrock, 98, of Humboldt, Nebraska was born on November 15, 1923, in rural Verdon, Nebraska to Benjamin and Mary (Gebhard) Friedly.  She was baptized and later confirmed at St. Mark’s Lutheran Church near Verdon.  Marion attended District #31 country school for grades 1-8 then attended Falls City High School where she graduated with the class 1940. After attending Peru State College for a year and teaching country school, Marion returned to college for two more years and then taught in Falls City.

On October 15, 1950, Marion was united in marriage to Fred Wittrock at St. Mark’s Lutheran Church near Verdon, Nebraska.  To this union three children, Gary, Larry, and Cheryl, were born. The couple lived north of Falls City and later moved to the Dawson area where Marion taught country school in various areas. After moving to Humboldt in 1961, Marion began teaching for Humboldt public schools and retired after twenty-seven years.  She was a member of Delta Gama, Retired Teachers Association and St. James (Long Branch) Lutheran Church in rural Humboldt.  Marion loved to travel, both in the United States and overseas.  She and Fred had visited all 50 states.

Marion passed away on Friday, November 11, 2022, at the Colonial Acres Nursing Home in Humboldt, Nebraska having reached the age of ninety-eight years, eleven months, and twenty-seven days.  She was preceded in death by her parents; husband Fred, son Gary, a sister Thelma Swisegood, and brother-in-law Gilbert Thomas.

Inurnment will be at the Steele Cemetery in Falls City, Nebraska at a later date.

Memorial contributions may be given to the St. Mark’s Lutheran Cemetery Fund.