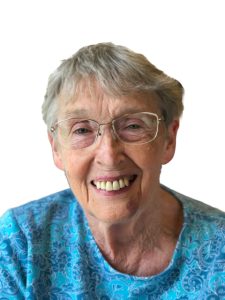 Cecelia Kunce (Ceil) passed away on November 2, 2022, at the age of 87. Cecelia was born on July 2, 1935, in Council Bluffs, Iowa to J. Leo and Cecelia Connolly. Cecelia was tiny but mighty – she was quiet, but strong and in charge in surprising ways. She will be deeply missed by those who knew her.

The middle child of ten, Cecelia grew up in a small house in Council Bluffs. The family’s world centered around Holy Family, the local parish and school. As a child, she loved reading and swimming. Cecelia had a lifelong and abiding love of baseball, having grown up watching the game with her father.

After graduating from Holy Family High School, Cecelia attended the College of St. Mary in Omaha, where she got a teaching certificate. She later received her bachelor’s degree at Briar Cliff College in Sioux City, Iowa.

During high school, she worked as a cashier at Smith Drugs in Omaha, where she met Ken Kunce, a young Creighton pharmacy student. He persuaded Cecelia to go out for coffee with him and, eventually, to marry him. They were married on July 14, 1956, at Holy Family Church in Council Bluffs. After the wedding, Cecelia worked for a short time as a 2nd grade teacher, before she left that position to care for her five children, Ken Jr., Julie, Amy, Jon, and Mary.

The young family moved around the Midwest and Colorado until they settled in Onawa, Iowa in 1964, where the family owned and operated Onawa Rexall Drug. Cecelia was involved in the local parish and community and was busy raising five young children.

In 1977, the family moved to Falls City, Nebraska, when Ken bought Shestak Drugs and, with Cecelia’s encouragement, renamed it Ken’s Pharmacy. The soda fountain was the town’s gathering place to have a cup of coffee and a piece of homemade pie for a quarter and to catch up on all the news of the community, and Cecelia spent many hours in the pharmacy helping with the books, catching up with the customers, and talking and laughing with the pharmacy staff.

Eventually, Cecelia operated a JC Penney Catalog franchise in the pharmacy. She was ahead of her time as a businesswoman. Cecelia was an excellent and exacting bookkeeper, and she got great joy in running her own business, But Cecelia’s main job was to raise 5 kids while Ken worked long hours in the pharmacy. Cecelia had a keen ability to understand people, and often had insights into why certain people do certain things, which meant that she was a kind, patient, accepting, and understanding wife and mother. She was a survivor – among other things, she survived loss of her eldest son, and her dearest sisters, and devoted husband.

Cecelia was a champion shopper. She loved finding a bargain and was always the first to adopt the newest “gadget.” She was introverted by nature, but for those who knew her best, she gave and took delight in being with them. She had a handful of friends she enjoyed seeing when she was in Falls City, many of whom were part of her extended work family – they were women of all ages who worked in the pharmacy and became close to Cecelia as a result.

She was an avid reader – she read the paper cover to cover every day, and particularly was fond of reading biographies. Cecelia was always up for a trip, whether it be by car or plane, and willing to do things that were outside of her comfort zone in surprising ways. She and Ken particularly enjoyed traveling to pharmacy conventions and seeing friends that they had made around the country over the years. They would visit family in California, and got to be expert at going to the Rose Parade (and the Rose Bowl game), because they went so frequently. They often went to baseball games, and were frequently at Royals games in Kansas City or Cubs games in Chicago. Their trips were active ones – going to museums, seeing historic sites, going to local events and sports.

Cecelia planned all of the itineraries in great detail, with guidebooks and maps, and triptiks, and (after GPS came along) with the help of at least two different GPS devices working at the same time while she read the map, much to Ken’s consternation – he heard the directions from 3 or 4 different voices – 2 to 3 GPS devices and Cecelia. He was much more of a “let’s see where this road takes us” kind of traveler; Cecelia had everything planned out. But they stayed on the road, together and headed in the same direction, for 63 years. Ken passed away in March 2019.

More than anything else, though, Cecelia loved her family. She took great joy in her five children and her five grandchildren. She will be missed by each of them, and by so many in each of the communities that she touched. Falls City and this world are richer because Cecelia Kunce brought her own quiet, strong, determined spirit and joy to it. She will be missed by many and remembered always.

Cecelia is survived by her children Julie Kunce Field and her husband Stuart Field of Fort Collins, Colorado; Amy Kunce of Lincoln; Jon Kunce and his wife Kathy Radosta of Bellevue; and Mary Kunce and her husband Rick Johnson of Seattle, Washington, as well as grandchildren Sam Field of Fort Collins, and Ellen Field of Boise, Idaho, and Conor, Evan, and Aaron Johnson of Seattle. She was predeceased by her husband Ken Kunce, her son Kenneth J. Kunce, Jr., and her siblings Leo, Rita, Tim, Nancy, and Janice.

Cecelia’s family invites the community to celebrate her memory on Saturday, November 12, 2022, starting with a Rosary at 10:30 a.m. and with a memorial mass at 11:00 a.m. Both will take place at Sts. Peter and Paul Catholic Church, Falls City, Nebraska. A luncheon will follow the interment at the Falls City Catholic Cemetery.