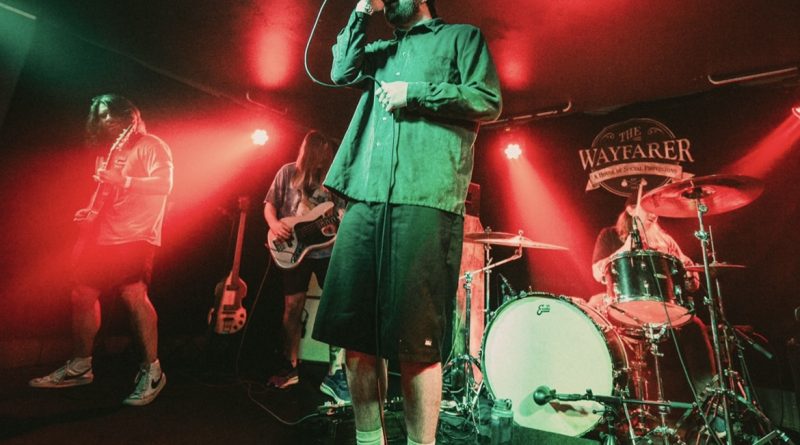 Falls City native and 2014 graduate of Falls City High School Chase Thompson has been tuning up for the main stage since he was a child. Chase, the son of Heather and Shawn Thompson, wrestled, played football and participated in band while at FCHS but remembers loving music at a young age.

“I was super young,” said Thompson. “Even when my sister was born, I was five years old; I got a couple of CDs.” It went from just liking music to thinking about turning it into something more in college.

Thompson was influenced by rock music, specifically Kid Rock, but liked a little bit of everything.

“The blend of everything,” referring to Kid Rock. “He had country, hip hop, rock. I think listening to him a lot, I was kind of like, I like everything. Growing up, mostly rock because that’s what my dad liked.”

Last year, Chase and his band, Salt Creek, signed a record deal with Tooth and Nail Records. Based in Seattle, Washington, the label has had nearly a half-dozen albums go certified gold with sales of 500,000 or more. The label currently has 25 artists signed to record deals.

In October, the band released its first record under the new label, “Out of the Sky.” According to the band’s bio, Salt Creek is an alternative rock band from Lincoln, Nebraska, inspired by the 90s grunge and their midwestern roots.

The group was having trouble coming up with a name for their band, and with the band all living in Lincoln at the time, Salt Creek seemed like a fit. The band began playing together in 2017 and for the most part, has stayed together, losing just one member along the journey. Members Nathan Richardson, Zach Chrastil and Nathan Skinner live in Lincoln, while Chase still calls Falls City home.

Chase sheepishly calls himself the creative guy, not wanting to draw too much attention to himself. “I’m very heavy, the creative guy,” says Thompson. “It’s hard for me to say I’m the front man because I don’t feel like that. I would say I’m probably the songwriter, definitely the creative head.”

Thompson’s run toward the stage started around fourth grade when he took guitar lessons. From there, he went to drums and with the guitar, he picked up the bass and can “noodle” around on the piano.

“Singing was no lessons; I should probably still get lessons just for my own sake,” laughed Thompson. “I just want to keep my voice; I don’t want to end up hurting it somehow.”

“I would say universally, all streaming sites, YouTube, I think it’s in some stores like Barnes and Noble. The record label is mostly just distribution; they will pay for us to make the record,” said Thompson.

The group started doing many DIY (do it yourself) tours, playing from basements to bars to big venues.

“Next month, we are opening for Shinedown, which is going to be a 15,000 crowd; you really get to see the evolution of crowds,” says Chase. The show Thompson was referring to is 89.7 The River’s Summer Bash at Westfair Amphitheater in Council Bluffs on Friday, July 15, 2022.

“I just shop at Walmart a lot, honestly. I just look for something cool I can put together,” Thompson said. “Recently, I’ve been making country music, doing my own thing with that, and one of my friends hired a stylist and that was a fun experience; I’ve never done anything like that before.”

The group stays busy, having just completed a trip to the west coast.

“It kind of depends; last month we played like 12 days and then we had weekend shows for the next two weekends,” said Chase. “Then we might take like a month off.”

Thompson said the band is in writing mode right now, so you can expect to see some new stuff soon. He is also getting ready to release some of his own music soon, which he is really looking forward to.

“It’s country, but it’s a blend of everything,” said Chase about his solo work. “I’m excited for that, very excited. The best songs just come out of nowhere; some ideas we’ll just float around forever.”

In between shows and tours, Thompson works for Eric Froeschl and wanted to make sure to thank him for letting him off work as he chases his dream around the country.

The show next week featuring Shinedown, Jelly Roll and Austin Meade could be the big break that Thompson and his band members are looking for.