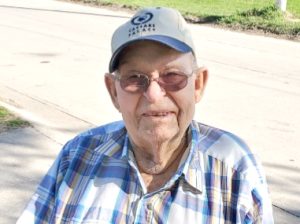 Richard “Dick” V. Wheeler Jr., 93, of Hamburg, Iowa formerly of Shubert, Nebraska was born on November 25, 1928, in rural Howe, Nebraska to Richard V. Sr. and Helen (Andrew) Wheeler.  He was raised with his family near Stella where he attended school and graduated from Stella High School.

On January 1, 1950, Richard was united in marriage to Joanne Nelson at the home of Grandma Gilbert in Stella, Nebraska and two children, Shari and Bruce arrived to this union.  Dick farmed for many years before he owned and operated his own trucking business in Shubert, Nebraska.  After Joanne passed away in 1991, he was later united in marriage to LaVonne Lunzmann and together they moved to Hamburg, Iowa where they resided until her passing in 1998.  Richard had a strong love for his family and always lent an ear to anyone, easily engaging in conversation.  He loved morning coffee time with the kids and conversations to be had at the kitchen table hearing about everything going on.  Dick was always up for an adventure/road trip to see something or to get something.  He loved traveling the country, seeing things and loved talking about it.

Dick passed away on Wednesday, June 22, 2022, at the Tabor Manor in Tabor, Iowa having reached the earthly age of 93 years, 6 months and 28 days.  He was preceded in death by his parents, wife Joanne, brothers Hobert “Hobe” and Keith Wheeler, sisters-in-law Elaine Wheeler and Becky Nelson and brother-in-law Richard “Dick” Behrends.

Graveside Services will be held at 10:30 a.m. on Thursday, June 30, 2022, at the Bedford Cemetery in Howe, Nebraska with Pastor John States officiating.

Memorial contributions may be given to the Richardson County Cancer Fund.