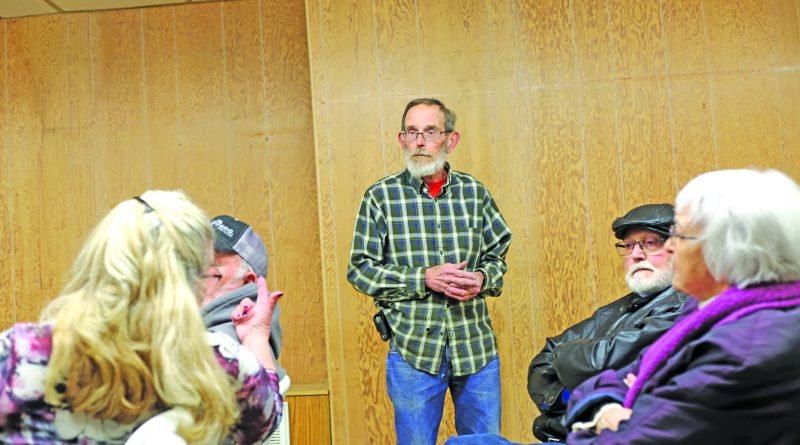 Humboldt Mayor Bob Mendenhall and Larry Stauffer and Jan Wilhelm of the Humboldt City Council addressed community members last Friday night during a Town Hall meeting. The purpose of the meeting was to discuss the proposed 1.5 percent increase Sales Tax placed on the May 10, 2022, ballot.

Mayor Mendenhall told the community members he wanted to have a conversation with everyone to get everyone’s input and explain how the funds would be used.

According to the last census, Humboldt is classified as a second-class city with 800 people.

Mendenhall said the sales tax is “desperately needed” due to rising expenses and the equipment that needs to be replaced, costs for water and sewer, swimming pools and other items that need to be addressed around the community.

According to the Mayor, the situation now is better than it had previously been.

“I’m proud of that. The Council has really done a very good job. We watched or semi-fixed expenses as much as we possibly could. But our fixed expenses are still there. We still have a $1.1 million bill for water, and we have a million-dollar street bond payment,” said Mendenhall. “We renegotiated these this last year and dropped our percentages down, which is saving the city a considerable amount of money. But still, we owe that money.”

It costs the city $2,000 a month for streetlights, which some residents may not realize. Over $40,000 was budgeted for the Library, which Mendenhall said he believed was necessary for the community. The biggest expense this year, according to the Mayor, is water. In 2022, Humboldt has spent over $270,000 on water, and that total is about $20,000 more than was spent in 2020.

The sewer plant is in poor condition, and the city is doing all it can to keep it going.

“So there’s a lot of things that this money can be utilized for, to make our community stronger, and more importantly better,” said Mendenhall.

The city would like to offer services such as snow removal, fire, rescue squad, Library and the swimming pool to their residents. The Fire Department is currently using coats that are nearly a decade old. They are holding their own with costs and doing their best with what they have to equip 20 firefighters. For a new pumper, they’re looking at three-quarters to a million and a half dollars for a truck. The department is fundraising to help with building maintenance.

This sales tax would help with expenses for these types of services.

The current swimming pool costs the city “probably approximately $25,000 to $30,000.” That total is after passes are sold for the year. “Keeping it going is a major undertaking,” said Mendenhall.

The pool was first opened in 1951. The City Council recently closed the baby pool, but the Mayor emphasized that they don’t want to start sacrificing services.

“Even though we’ve negotiated these bonds, we’re still looking at over $100,000 a year for each one of us. Insurance runs approximately $42,000 a year. The bill can’t be paid quarterly; it must be paid in a lump sum in December, no exceptions. Other bills are also due in December; then, the Street Bond is due in January.

“So the funding, we these things are extremely difficult,” said Mendenhall.

Council President Larry Stauffer said some taxable sales come from the Internet. Sales made by retailers via the Internet are taxed in the same manner as sales made by other retailers.  Exception – Sales of household goods and personal effects made on an online auction site by an individual are not taxable if: The sale is made only once per calendar year for three days or less, and The type of property placed on the online auction site does not include anything similar to that sold by the individual (or any member of the individual’s household) in a trade or business.

The money would not be earmarked for any particular project; it would go into a general fund and be used at the discretion of the Council.

The tax rate will remain in effect for a ten-year period if passed.

The Mayor said some of the money can be earmarked for the pool but can’t be guaranteed because it will be up to the Council to decide. He mentioned that the pool was built on a water table but can’t be moved because of the pool house. The ball fields should be able to get help for repairs and grants are always being looked into.

Stauffer said he’s been in contact with an outfit in Kansas about swimming pools and he’s excited about looking more into it. But he’s not sure it’s affordable. He said he thinks fixing the current pool would be like putting a match to a $100 bill. “We’re spending good money after bad and we’re just band-aiding it to the maximum.”

Another issue with the pool is finding help. Last year finding help was a significant issue. This year the Council has passed many motions to help with certification aide to encourage more kids to lifeguard and come back the following year.

The city sewer plant is in “horrible” condition and the sewer lines have recently been found to be in horrible shape. That’s going to be another significant issue for the city. They are falling in and leaking.

“We really don’t want our town to die, and it’s going to help out so much in the long run,” said Councilmember Jan Wilhelm.

The last time the sales tax was placed on the ballot two years ago during COVID, it lost by one vote. The Mayor spoke with someone from Pawnee City, and they didn’t think the sales tax they’ve had the past four years had affected them negatively.

Mayor Mendenhall said he would like to visit with city members about the sales tax rather than write an article for the paper or place information on Facebook to communicate better. Still, the point is, “I don’t want to lose services. We’ve got to have the equipment to remove snow whether we like it or not. We’ve got to have the particular equipment. As you know, it’s outdated, it’s old and it costs more now to try to fix it than to do something else,” said Mendenhall.

The Mayor encouraged anyone to come to another Townhall meeting held sometime in April with questions or comments.