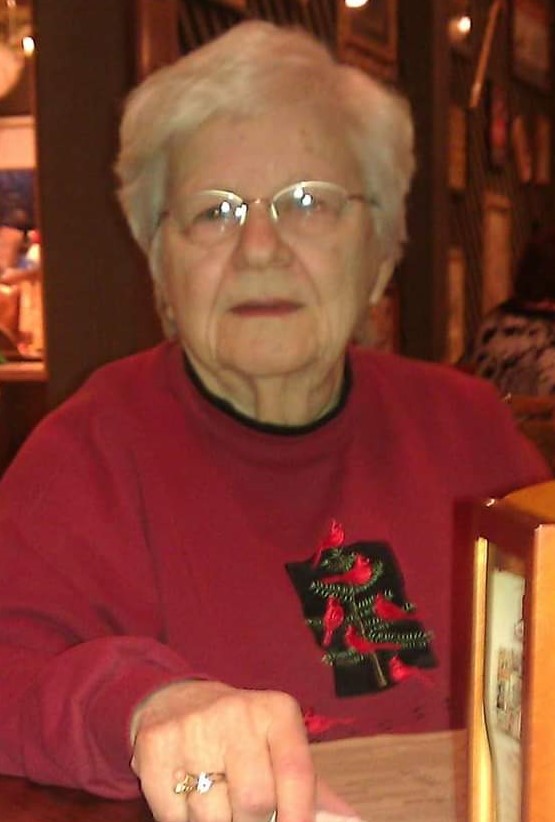 Clara Ellen (LaMiller) Coonce, 93, of Humboldt, Nebraska, was born January 26, 1929, in Upsala, Minnesota. She was the fourth child born to Lester G and Rosa (Weick) LaMiller and was united in marriage to Robert Eugene Coonce Sr. on June 9, 1947. Clara moved from Minnesota to the Falls City, Nebraska, area as a small child. She attended schools in Falls City and graduated from Falls City High School. A few years later, Clara graduated from cosmetology school. Several years later, she decided to attend community college, where she studied hotel and restaurant management. In addition to being a homemaker, Clara worked in a law office, was a beautician, and worked at the care facility in Humboldt. Clara was always eager to expand her knowledge and took every opportunity to read educational materials. She especially loved reading novels, but cookbooks ranked high on her list. While most families bring T-shirts and ball caps back as a travel gift, Clara’s family would bring her cookbooks from the area they were traveling.
In her early years, Clara attended St Paul’s Lutheran Church in Falls City, where she played the organ part-time. After Bob’s release from the military, they moved to the Humboldt community and became members of Faith Lutheran Church. Clara was active in the Church for many years, where she played the piano and organ, sang in the adult choir, taught Sunday school and vacation bible school, was a member of Lutheran Women’s Missionary League and participated in sewing quilts. Clara enjoyed preparing and serving food at the Church’s ice cream socials and the soup suppers.
Clara treasured her family and watching the “kids” grow. She enjoyed gardening for fruit, vegetables, and flowers. She spent many hours canning, making jelly, and baking. In her spare time, you would find her sewing, quilting, embroidering, or crocheting. Clara envied her mother’s ability to “tat” doilies which she couldn’t do. She was the first to admit she could not master knitting. In their early years, Clara and Bob relished the evenings when they could play cards with friends. Clara absolutely loved watching the birds at the feeders and looked forward to each spring when the hummingbirds would return. She spent many hours studying the Bible and, in her later years, looked forward to the homebound visits from the St. John’s Pastors in Topeka, Kansas.
On Monday, February 14, 2022, Clara passed away peacefully with her children at her side. Her death came just 19 days after her 93rd birthday. She was preceded in death by her parents, husband Robert E Coonce Sr in 1997, son-in-law James L Ingwerson, sisters: Lela Irene (LaMiller) Hardenberger, Olive Gertrude (LaMiller) Lauwers, Nettie LaMille and great-great- grandson Kaysen.
Clara is survived by her son Robert (Janet) Coonce Jr. Humboldt, NE; daughters: Rose Mary Ingwerson of Topeka KS; Renee (Matthew) Kimpston of Riverton IA; grandsons: Gene (Kristin) Ingwerson of Topeka KS; Pat (Valarie) Coonce of Beatrice NE; Jason (Carmen) Post of Lincoln NE; Emilie (William) Goering of Nebraska City, NE; John (Emily LaRock) Kimpston of Sidney IA; Mitchell Kimpston of Riverton IA; 18 great-grandchildren, 10 great-great-grandchildren, many grandnieces, grandnephews, great-grandnieces, great-grandnephews, cousins, step-grandchildren: June Lambrecht and family, Mike Keeton and family, Shane Keeton and family, and friends.
Funeral Services will be held at 10:30 a.m. on Friday, February 18, 2022, at Faith Lutheran Church in Humboldt, Nebraska, with Pastor Tim Llewellyn officiating.
Visitation will be from 1-8 p.m. on Thursday, February 17, 2022, at the Wherry Mortuary, 207 N. Nemaha Street in Humboldt, Nebraska. The family will greet friends from 5-7 p.m. at the mortuary.
Graveside Services will be held at 2:00 p.m. on Friday, February 18, 2022, at Steele Cemetery in Falls City, Nebraska.
Memorial Contributions may be given to the Faith Lutheran Church or the American Heart Association.