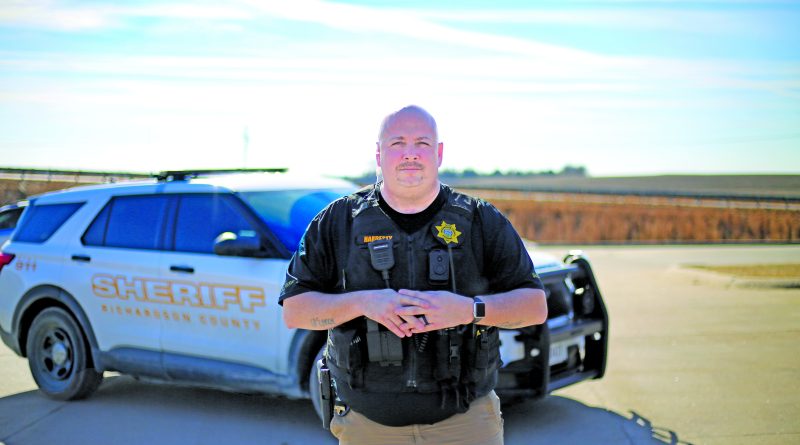 (This interview with Sheriff Hardesty was conducted before the passing of Sgt. Jeremy Goldsberry)

We aren’t on Highway 75 more than a minute when Sheriff Hardesty’s radar begins to sound.

He turns the car around and catches up to the vehicle. It’s going fast, real fast, like many vehicles on Highway 75.

“We have so many fatality accidents on this road, it’s unbelievable,” Hardesty later says.

Every fatality accident he’s worked since he came to Richardson County has been on this highway. Sure, there have been other severe accidents around the County, but they weren’t fatalities.

Hardesty steps out into the frigid December wind approaching the vehicle as eighteen-wheelers pass by at little too fast for comfort. At a recent County Commissioner meeting, it was said that Richardson County has more traffic stops than a lot of other local counties combined.

Sheriff Hardesty said he takes that as a compliment.

“The hardest thing that I’ve tried to instill in our guys and why we make so many traffic stops is, be proactive. If we don’t stop her (the individual he had pulled over), she drives down the road; she might kill somebody. I’m not saying that she might, but she got a ticket and maybe she slows down,” said Hardesty.

He  tries to tell people, getting a ticket isn’t great, but it’s better than killing someone or yourself.

“We like to think it helps slow some people down,” said Hardesty.

Sheriff Rick Hardesty Jr. came from a small town and was brought up knowing how important family is, but not just your family at home, your work family too.

“These guys and gals, they’re my family, my work family. If somebody’s sick or has a sick kid, I try to pick up the slack and cover because I understand what it’s like to not be at home with family,” said Hardesty.

Wanting to be a cop, but coming from a family of truck drivers, he ultimately decided to follow in the same footsteps as his dad, brother and uncle and got his CDL when he turned 21. The time away from his family was too much, so he went to work at the prison in Tecumseh. Finally with some encouragement from his wife, he decided it was time.

At 39 years old, Hardesty got certified and graduated from the Academy. It was no easy feat. Training with a group of twenty-year-olds was a bit of a challenge. At one point, he pulled a hamstring, but he didn’t give up. Wanting to be a leader, he went back out and finished the obstacle course.

Hardesty started at the Richardson County Sheriff’s office under Sheriff Don Pounds in May of 2019. Less than two months later, Pounds submitted his letter of resignation.

After talking with his wife, she helped him with a resume for the position of Sheriff. When he got the call with the offer for the job, he and his wife were both surprised. They’d now be packing up and moving to Richardson County.

Sleeping in his chair for the first two weeks on the job, the new Sheriff first wanted the public to know that people could trust them.

“That’s always going to be important, that we’re not going to make everybody happy all the time. But I want them to have the faith that when they call us, we’re going to be there.”

He says he feels lucky to be in the spot he’s in thanks to County Commissioners, Terry Frank, David Sickel and John Caverzagie.

“They gave me the opportunity and I ran with it. I’m a pretty simple guy; what you see is what you get. I’m going to show up and I’m going to do my job the best I can and we go from there.”

But he doesn’t do it alone; he credits the deputies and staff who oversee the jail for carrying a lot of the workload.

“What separates us from everybody else is 99 percent of the guys that work here. They have the same mentality. We do a job; we do it to the best of our ability. I don’t have to sit and say, ‘hey, go to work,’ They’re at the office or doing reports; they’re researching an investigation.”

Looking at numbers at the end of each year, they set a bar and continuously push themselves to be better.

Today the Sheriff finds himself on the road working traffic. It’s the weekend and that’s generally when he gets to work traffic and travel through every town in the County, making sure everything looks alright. Working close to 80 hours a week, he believes being out with his guys doing search warrants; he’s leading by example. “I’d never ask them to do something I wouldn’t do.”

He responds to another call, one that the Humboldt Rescue Squad has also shown up for. He rushes in and checks it out.

“You just never know in Richardson County,” he says as he returns, then immediately begins to praise the Humboldt Ambulance crew. “These guys that are volunteers, they make our job so much easier.”

He talks about the good people in Richardson County during the recent windstorm and how they came out to help each other pick up debris, especially the help of current County Commissioner Rick Karas.

“Hat’s off to Karas. He came in [to Humboldt] during the storm. I’ve got debris all over the highways. There Karas is with gloves on, gray hair and all in the trenches picking up.”

“People pulled together. That’s the best part of living in small communities.”

The Sheriff’s Department can only work one side of a situation like this. When the community helps, and is safe and smart about clean-up, it allows the Department to leave and check on others who may be hurt.

This year has been more of a challenge for the Department than Sheriff Hardesty expected. “I thought you know what, 2021 will be a lot better than 2020.”

Sen. Steve Lathrop sponsored a bill passed in May, LB51, which increases certification and training standards for Nebraska Law enforcement officers. The Sheriff’s Office is getting everything “up to par” and accredited. They’ve also been getting used to the new dispatch done by the Southeast Communications 911 Center in Beatrice and transporting people due to the lack of beds in the jail.

“The jail is a whole different animal,” said Hardesty.

The Department seized 21 firearms in 2021 (compared to 24 in 2020), explosives and numerous items of stolen property. Several fraud and forgery cases were investigated as well. Those cases resulted in numerous felony charges, including one case adopted by the United States Secret Service.

Knowing there was a need for more room, Hardesty went to the Commissioners to discuss a Jail addition. Last summer, Deputies were being taken off the road to transport inmates all over Nebraska and into Kansas.

Three guys went in three different directions at one point, transporting inmates. Two days later, they were on the road again headed to Jefferson County for transport.

Washington County, Kansas would take them, but challenges come with transporting inmates out of state. Blair, Nebraska, nearly two hours away, can, at times be the closest place to transport. If an inmate is a female, the County pays overtime for a female employee to accompany an officer, the gas and $55-$80 per day for housing.

The jail has booked approximately 1200 people from September 2019 through mid-December 2021. In 2020 with COVID, 475 people were still booked. “And none of this is possible without (Deputy County Attorney) Samantha Scheitel,” said Hardesty.

The Richardson County Sheriff’s Department has seen it all. They’ve seen what meth can do to someone and how terrible it is. He said he’s seen how hard it is for them to get sober and stay that way, but rehab won’t fix someone who doesn’t want to be fixed.

“Rehab is a waste of time and waste of money unless somebody truly wants help. It’s up to each individual to say, enough’s, enough.” 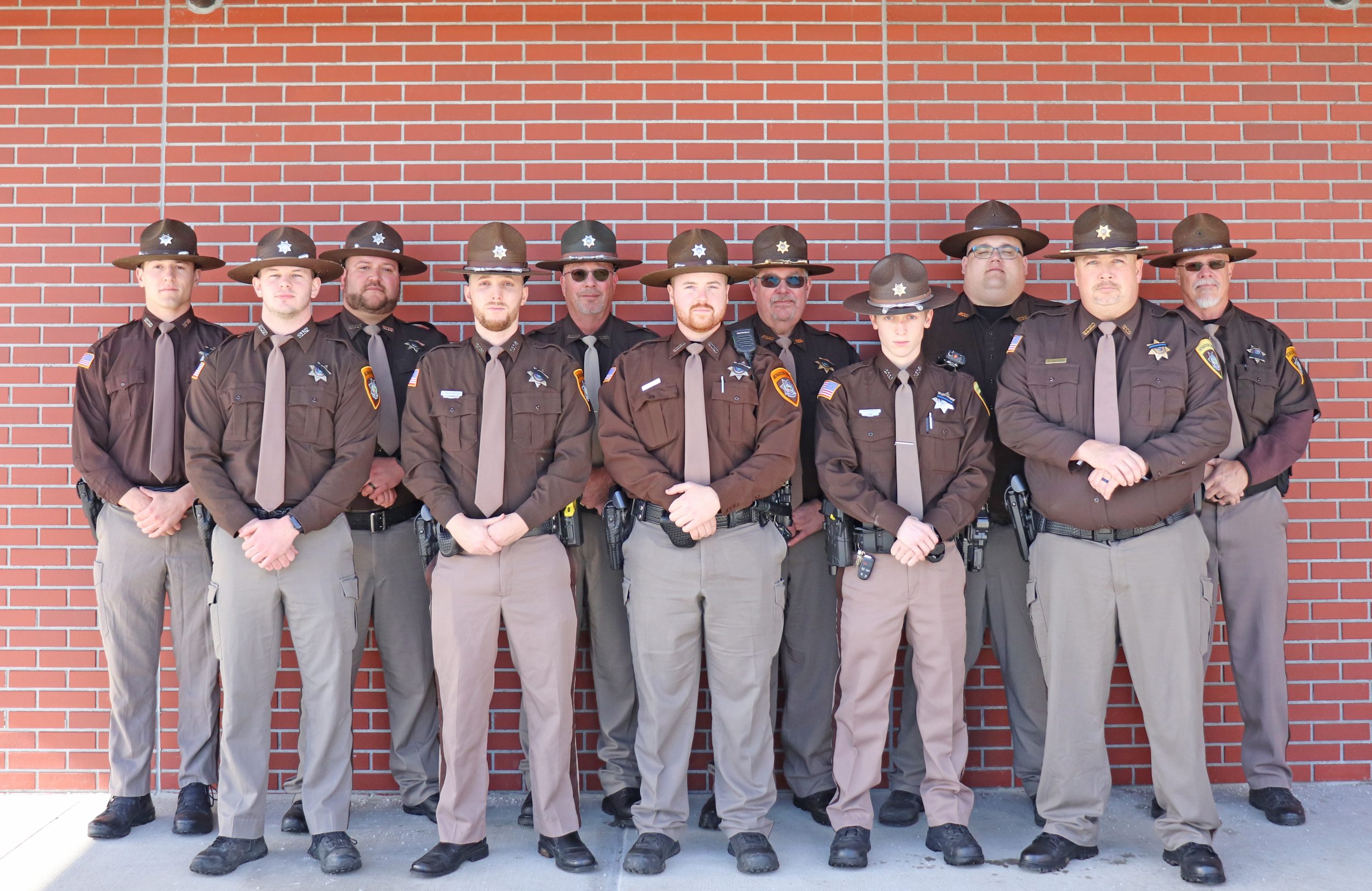 He feels that’s why the work on Highway 75, a road traveled on by residents of his County, matters.

“There’s dope, large quantities that go north and cash going south. We’ve had three people that had full extradition warrants out of Texas. What happens if they go down the road and rob somebody, or you know you could prevent something else from happening?”

The Sheriff’s Department hopes that the addition will have 40 beds and with that come’s the possibility of a contract with the U.S. Marshals who have been in contact with the office. If they take 20 beds, they could help pay the bond. A possible $438,000 per year to house inmates pretrial.

The survey conducted by the Sheriff’s Department showed overwhelming support for the jail addition.

Though the community had raised concerns regarding the housing of federal inmates when the Sheriff’s Department asked for public input. Hardesty said inmates would be pretrial, meaning they would go someplace else once they’re sentenced, and Richardson County would only house them until they went to Federal Court.

“The last thing I would do is bring more people here to let out to be more of our problem.”

He said another problem that’s come to his attention is, what happens if he’s not Sheriff? He doesn’t intend on going anywhere, but he says he can’t answer that.

Hardesty says the people in Richardson County are the people who matter most.

Hardesty says they want to build for now and build for the future and if it doesn’t get done, at least he tried. He’d like to see Richardson County be a front-runner instead of a follower.

The next meeting of the The Citizen’s Advisory Committee  regarding the proposed Jail Expansion Project will be held on Wednesday, February 2 at 6:30 p.m. in the District Courtroom of the Courthouse in Falls City. The meeting is open to the public.