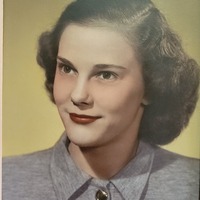 Margaret (Peggy) McFarland of Lincoln, passed away at the age of 91 on Sunday, November 14, 2021 at her home in Lincoln, NE. Peggy was born in 1930 to Mary (Boehme) and John Niedecken in Falls City, NE.  She graduated from Sacred Heart High School in 1948. Peggy and James (Jim/Mac) McFarland were high school sweethearts.

On January 19, 1949, she married the love of her life at Saints Peter & Paul Catholic Church in Falls City, NE. Peggy and Jim lived in West Point, NE, where Jim was a Nebraska State Patrolman.  She taught Red Cross swimming lessons, was a Brownie and Cub Scout leader.  They moved to Lincoln in 1965 and have been faithful members of the Cathedral of the Risen Christ Church. Peggy was a real estate and insurance broker for many years for Regal Real Estate and a customer service rep at the first HyVee Grocery Store in Lincoln. Jim and Peggy were avid golfers, with Pine Lake Golf Course being her favorite course and where she had three holes-in-one and won several tournament trophies. Peggy enjoyed sewing, needlework and knitting, especially booties for her grandbabies.  She is remembered by her children as the best mom ever and for her very calming touch with babies.