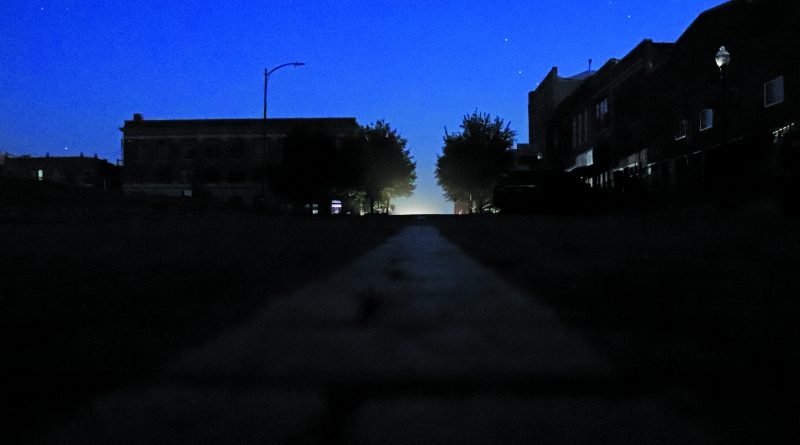 Story and photo by Nikki McKim

Most of Falls City, including the downtown business area, was left without power last Monday and Tuesday nights.

Guests of the Grand Weaver Hotel arrived to a not-so-fun surprise, unloading luggage and using cell phone flashlights to find their way around. Once they made it to their rooms, they quickly opened windows and used flashlights to navigate their surroundings.

Many tried to beat the heat by cruising Harlan Street, while others walked around uptown to catch a glimpse of Stone Street businesses during a blackout. For the most part, the City was quiet, with only the occasional sirens and neighborhood dogs barking.

The power went out around 5:30 p.m. on Monday, September 27. According to Falls City Utility Superintendent Ray Luhring, at first observation, the Department assumed there had been a power cable failure; however, they were unclear what had caused it. The transformer needed to be checked. OPPD was then contacted and it was requested they send a crew to test it, as it requires a specialized skill set and equipment to perform the work. OPPD agreed and the transformer was tested and cleared. Only then was it certain it was a cable failure, but the cause was still unknown and remains unknown.

“We suspect the age of the cable and some tracking to ground caused it,” said Luhring.

An underground issue that couldn’t have been seen or caught ahead of time.

Power was restored on Monday at 9:30 p.m. when generators connected to the 4.16Kv system were started. Those who lost power on Monday night were supplied power with generators until 3:30 p.m. on Tuesday. The power then went out again for the same customers who lost power the night before and it wasn’t a scheduled outage. Had the City of Falls City generators not been used, those without power would have gone without it for over 24 hours.

There were issues with electrical frequency on the lead generator which resulted in the generators tripping offline. This time power was out for almost six hours until all repairs had been made and the 13.8Kv system and 4.16Kv system were synced and tied together by the 13.8Kv/4.16Kv transformer.

OPPD was able to supply Falls City with the power cable, cable terminations and lugs to get everything back on track.

“Our crews did a great job in assisting OPPD with that portion of the repair and was a great learning experience for them,” said Luhring. “Because of the very rare occasion that something like this happens, we cannot justify having the expensive equipment and personnel on staff to operate it. The City continues to have a great working relationship with OPPD and I am very grateful for that.”

“The outskirts of the City are fed from the 13.8Kv system, which was unaffected by the power outage, so those customers remained on while the rest of the City was without power,” said Luhring.

The factories south of Falls City are fed from the industrial circuit on the 13.8KV system and were not affected by the power outage, so had the outage been scheduled, the factories would not have been notified and were not notified to prepare as has been rumored.

The contingency plan for such events requires using the generators to supply power to the 4.16Kv system customers, explained Luhring. He also explained that after every significant interruption of service, a de-briefing is conducted to discuss how it went and how things can be improved if such an event occurs again.

“While we most certainly know it is extremely frustrating to our customers when they are out of power, the City has extremely dedicated employees, which in this case worked two solid days without sleep to address a very difficult situation,” said Luhring. “The crews worked around the clock with absolutely no complaints to resolve the issue in the most efficient and safe way possible. We will never sacrifice employee safety in situations like this; when it involves electrical power, things have to be done in a specific manner.”

City Council Member Mitch Merz took to social media to update citizens of Falls City on the progress at the power plant. He also praised the linemen for their dedication and hard work during such a trying time, “Our linemen worked all night and most of them went home at 4 a.m. yesterday (Monday, September 27) morning and reported back at 6:30 a.m.! They were all still there at 10 p.m. last night finishing up. High Fives to those guys!”

Merz also reminded citizens of the recent City Council discussion of updates that are desperately needed for utility improvements, “The outdated distribution system needs updated. The City Council already has approved the contract to move forward with this. But the work has not yet been engineered nor went out for bid. It is a long process, but the process was already started before this unfortunate issue.”

The City Council started the discussion about utility improvements a few months ago.

“Long story short, there needs to be a lot of upgrades to our City, electrical, gas, sewer, water, there’s that. If you guys review this, we have a price tag upgrades that need to be made within the next ten years of $31,675,000,” said Council Member Derrick Leyden during a previous City Council meeting.

Some of the highlights Leyden gave for the electrical upgrades included both the building and the circuit switches, etc.; water mains need to be replaced throughout the City, valves, SCADA system, gas lines, a five million dollar upgrade to the wastewater treatment plant depending on what the government decides if the City complies or not, sewer mains, vehicles and tractors and equipment that needs to be upgraded.

“I don’t want to be in a situation where we’re chasing our tail when we have something go down and we have to expend all this money and not have a plan,” said Leyden. “I think the time is now that we have to start planning for this and acting on this.”

One would be a temporary sales increase; two would be a budget cut; three would be a utility increase and four would be to bond out.

During the September 20 City Council meeting, the Council discussed and approved drafting an ordinance that will go to vote to increase the city sales tax by one-half percent for ten years.

Leyden reminded everyone that this wouldn’t be the “end all be all” to find everything to cover the $31 million needed to make the improvements required for the electrical upgrades Falls City needs. Leyden ran the numbers during a previous Council meeting and stated it would take 70 years to pay the amount necessary by just trying to cover it by raising the city sales tax.

The ordinance that will need to be drafted by City Attorney Mike Dunn will need to be approved by the citizens of Falls City in the voter’s booth come the May 2022 primary election.

“The City has been working on upgrades; this is an unpleasant reminder of why those significant investments have been and will need to be made in our infrastructure,” stated Council Member Mitch Merz last Monday night on his City Council page.

During the second night of the outage, vandals hit businesses on Stone Street and one on Harlan Street. The Sixpence office, Farm Bureau Financial Services – Weston Witt, Brillows Nutrition and Verizon Wireless all suffered damage when debris was thrown through the windows or doors of their businesses, causing damage.

An investigation is ongoing. It’s unclear if the Falls City Police Department had extra officers on duty during the outage.