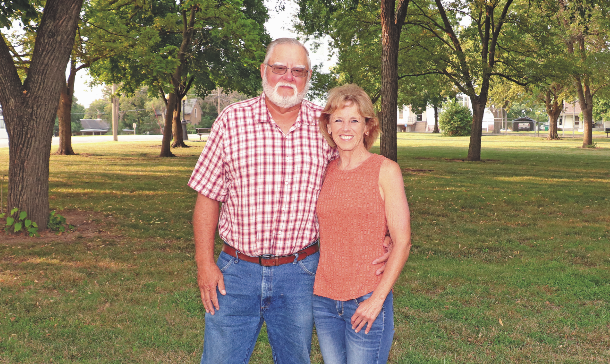 “Some people are better at giving than receiving. I think that these words are fitting for the selfless acts of kindness that Randy and Lori have done and continue to do.”

This was one of the many reasons Don Hogue gave in the nomination letter he submitted for this year’s Grand Marshal of the 2021 Cobblestone parade this Saturday, August 14, 2021, at 11:00 a.m.

Randy and Lori Gottula, long-time supporters of Falls City and every one of its citizens, were selected to serve as grand marshals by an anonymous committee comprised of parade volunteers and at large members of the community.

The grand marshal honor is given to an individual or couple that has given substantially to the betterment of the Falls City community.

The Gottulas owned and operated the Hinky Dinky/SunMart grocery store in Falls City for 23 years, employing 14 full-time people and scores of part-timers each year, including high school and college students. Upon his retirement from Sun Mart in 2013, Randy said seeing the young people move on to be successful is one of the things he was proudest of during his time there.

They also initiated the Support Our Schools program, through which the store donated thousands of dollars each year to area schools.

Randy has also worked part-time as a play-by-play announcer for KTNC and Sunny 101.3, and on August 27, will begin his 50th season behind a microphone. He was a member of the Richardson Foundation and served as its secretary. Randy was the voice of the Peru State Bobcats (both football and basketball) for 19 years, including the 1990 football national championship season. He also called play-by-play for the Cornhusker freshman program for two years until the program was discontinued. Randy established the Bobcat Football network in 1986. During his career, Gottula has called thousands and thousands of sporting events.

“It is a thrill to have Randy behind the microphone at any Falls City event. Nothing beats his energetic voice and knowledge of the games. He gives you the sense of being there live,” stated Hogue.

When Randy isn’t working a game, he can be found on the sidelines, taking pictures he gives to kids and their schools.

Lori often does the same thing. She attends games and takes pictures, and gives them away to the students.

“Just put a camera in their hands. They have taken life action photos, team photos, family photos, even weddings. But it’s the sports photos that stand out for me. They generously give pictures to the teams, to be distributed to every player, never leaving anyone out.  Each athlete is important in their eyes,” stated Hogue.

In addition to writing freelance feature articles for the Falls City Journal, where she shares stories of some of the wonderful members of our community, she’s involved in numerous other ways.  Other than directing the Cobblestone parade for the past 24 years, she has served as the Chamber of Commerce president, secretary of the Country Club board of directors, President of the ladies golf association; she was an original member of the Richardson County Arts and Humanities Council, and served as its publicist and even directed two high school musicals when the couple’s daughter, Cassie, was in school. In her “downtime,” she’s written seven screenplays and placed in several international contests with three of them, winning the 2014 Guideposts writing contest.

Lori says some of her proudest work is her recent speaking engagements to share her testimony (motivational speeches) with the community and beyond. She says those engagements and her faith are central to her life.

farm so they could spend more time with their three kids and five grandchildren.

“Even though they have moved to their family farm, they will still be contributors to this community, one which they call home,” said Hogue.