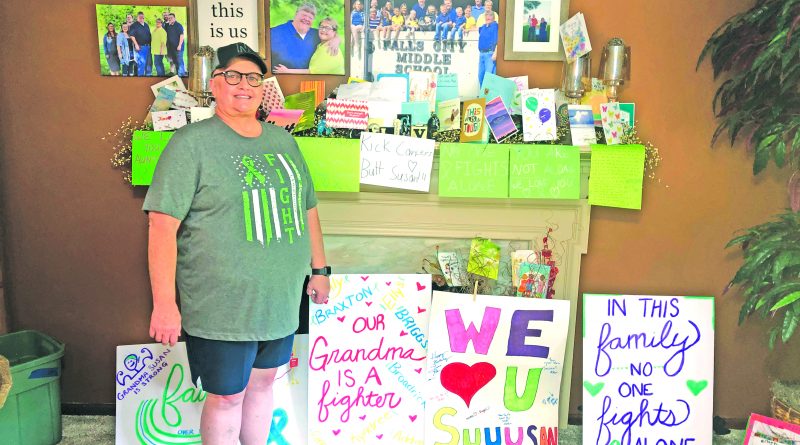 Story and photo by Lori Gottula

Those were the words that Susan Johnson said during a recent interview about a medical diagnosis she received in May, called “diffuse large B-cell aggressive lymphoma,” which basically means aggressive cancer of the lymph nodes. But the real impact of Susan’s words came not from the words themselves, but from her demeanor when she spoke them. Shoulders back, head held high. Her voice, strong and defiant. Her cap-covered head, bald but beautiful.

She said those words as she stood in front of the inspiration wall in her home, the place that she visits every morning before heading out to start her day. Pictures of her Brady Bunch family grace the walls. She and Rick blended their two families into one 23 years ago. Between them, they have five children and nine grandchildren.

“They are the reasons for my fight,” Susan said.

Beneath the pictures are get-well cards, cards of encouragement, cards stressing faith and determination. There are also signs. Oh Lordy, the signs.

“In THIS family, no one fights alone,” one says.

“Our grandma is a fighter.”

And many, many more.

“This wall gives me the determination to fight every day,” Susan said. Her battle with lymphoma started last December, just a few days before Christmas. She was sitting in a chair and touching the bottom of her chin, like all people do, when she felt a marble-sized lump that was hard and unfamiliar.

“I had an appointment with the dentist a week or so later, so I had him check it out,” she said. Dr. Kobza was concerned about the small mass, and told her to see a doctor soon. Susan wasted no time. She scheduled an appointment the following day, with Celeste Jones at Falls City Family Practice.

“Celeste sent me to see an ENT in Lincoln, and the doctors did a needle biopsy there,” Susan said. “The test came back negative. To say that I was relieved would be a gross understatement. I felt like I’d been given a second chance at life.”

Five weeks later, she returned for a follow-up, but the news wasn’t good. The tumor had grown significantly. In mid-April, her surgeon removed it. Susan waited nearly three weeks for a phone call about the results, and became increasingly worried when the call didn’t come.

“No news is good news,” her husband said. “That just means they’re sending a letter to tell you it’s negative.”

Tired of living life in limbo, Susan and Rick packed up shortly after the three week mark, and took a trip to Virginia to see their son, Justin, and his family. One day during the vacation, Susan, her daughter-in-law, granddaughter, and great niece, made a two-hour drive to the National Aquarium in Baltimore, where they intended to have a girls’ day out. That’s when the phone call came.

The doctor confirmed that Susan was in for a fight. She not only had cancer, she had an aggressive form of lymphoma. Susan dropped to the ground and sobbed.  Her daughter-law wrapped her arms around her and said, “Whatever this is, we’ll get through it together.”

Susan felt sick. In that one instant, her life had separated into “before” and “after.” Before the cancer diagnosis, and after the cancer diagnosis. She and her girls tried to finish out the day in Baltimore before the drive back home. Rick and Justin were waiting for her she arrived, their arms outstretched. Rick and Susan waited a few days until the news soaked in, then they told their other children.

“They offered their love and support from the very beginning, and haven’t let up since,” Susan said. Justin even dyed his hair green, the advocacy color for lymphoma. He soon figured out though, that green hair wasn’t going to fly at his job, so he shaved his head instead.

“Anything for you, Mamabear,” he said.

He and the rest of Susan’s kids, nieces, and sisters,  also started researching oncologists in this area who specialize in aggressive forms of lymphoma. Every search came back with one name: Dr. Matthew Lunning at the University of Nebraska Medical Center.

“After Dr. Lunning agreed to take my case, we moved very quickly, like bam, bam, bam,” Susan said. “Dr. Lunning had said, ‘This cancer is aggressive, so we will treat it aggressively,’ and he meant it.”

Susan had her first chemo treatment shortly after her diagnosis. When she arrived for the 6:45 a.m. appointment, several of her family members, including some of her grandchildren, were standing outside the hospital, holding hand-made signs of support.

“I don’t think I could have walked through that door without their support,” she said. She lost her hair within 10 days of the first treatment, and just finished her third and

(hopefully) final one. She will have to have 15 radiation treatments, as well. So far, though, her prognosis is good.  Since she acted immediately, the cancer hadn’t spread to her other lymph nodes.

She will have a PET scan on July 20th. Meanwhile, she and her army of supporters has been praying.

“My faith is stronger now than it has ever been. I firmly believe that God has a purpose for me in all of this. Maybe it’s to remind others that our lives can change in an instant, so we need to live life to the fullest. Or maybe it’s to tell people to pay attention to their bodies. If you find a lump, don’t brush it off. Be persistent about things that

don’t feel right. Be your own advocate.”

If cancer catches you off guard, too, throw your shoulders back and hold your head up high. Grit your teeth with steely determination, and say, “Not today, cancer. If you want to win, you’re going to have to fight me for it.”

Then, just like Susan Johnson has done, look cancer right in the eye, and say, “Because I am not going to let this beat me.”