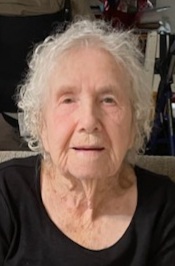 Gladys was born in Consort, Alberta, Canada, the daughter of Emmons E. Keller and Icie V. Neely Keller on September 2, 1927, when her father was threshing wheat there.  She was the seventh child of fourteen children in the family.

She married Harvey Roberts of Rulo, Nebraska, a staff sergeant in the U.S. Army stationed in Trieste, Italy.  After a storybook courtship of only writing letters, no telephone, sight unseen.  They were married on September 1, 1951, one day before her 25th birthday.

Gladys lived in Omaha, Nebraska, for a short time before moving to the Kansas City area prior to moving to Texas and The Colony. In her full life, she was a beautician, waitress, housewife, mother, grandmother, greenhouse grower, and office secretary.

After Harvey retired, they traveled for 12 years in their Suburban and trailer in the lower United States and Canada while staying at camping sites.

Graveside services will be at 11 a.m. Friday, June 18, at the Rulo Cemetery.

A special message or remembrance may be sent to www.chapeloaksfuneralhome.com, which also includes the Livestreaming site.