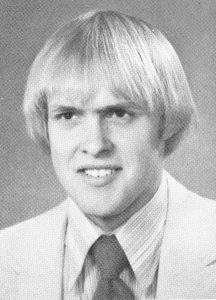 He graduated from Falls City High School with the Class of 1978 and was active in all sports but really love the science and movement of basketball. After high school, he followed in his grandfather’s footsteps and started his student training with the Union Pacific Railroad working out of Falls City and later moving to Kansas City, MO as a conductor. After over 20 years of service and wanting more time with his family, he moved to Buffalo where he and his wife Barbara were the co-owners of Niagra Sports Awards.

Doug is survived by his wife, Barbara L. (Shiesley) Sefried, three daughters, Rachel and Sarah, who are both students at St. Bonaventure University, and Katie, who is a sophomore in high school, parents, Jim and Diane Sefried of Falls City, Uncle Allen Shipley and family of Scottsdale, AR, niece, Cynthia and sister-in-law, Kris Sefried of Sanford, FL, aunt, Beverly Kimmel of Falls City. Doug was preceded in death by his grandparents and his beloved brother, Brad.

A memorial service was held at the D. Lawrence Ginnane Funeral Home in Buffalo. A private graveside service will be held at Steele Cemetery at a later date with Father Lawrence Stoley and Reverend Young Je Kim officiating.

A book is available to sign at Dorr and Clark Funeral Home during regular business hours.