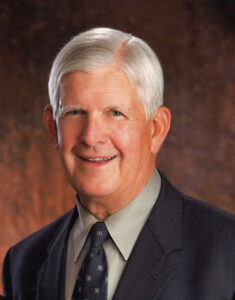 Dr. Harry Roscoe Tolly, of Lincoln, passed away on April 22, 2021 at the age of 83. Born in Humboldt on December 4, 1937 to Rose (Neiswanger) and Roscoe Tolly, a math teacher, principal, and football coach. The family lived in Falls City and Ord, before settling in North Platte, where Harry graduated a Bulldog from North Platte High School in 1955.

He attended Phillips Exeter Academy in New Hampshire one year before landing at the University of Nebraska on a full scholarship as the Cornhusker’s starting quarterback from 1957-1959, under coach Bill Jennings.

Harry led one of the greatest upsets in Husker football history—the 1959 win over Oklahoma on Halloween, snapping Oklahoma’s 74-game conference unbeaten streak, still an NCAA record today. He also was a pitcher for the Husker baseball team in 1959 and 1960.

Among Harry’s numerous college athletic achievement —he was the first Husker to receive the National Football Foundation’s scholar-athlete award and was also awarded the Tom Novak trophy.

He also excelled academically and in service. Among his many accomplishments—he was president of Sigma Chi fraternity, a member of UNL student council, Nebraska Air National Guard (1962-1967) and Innocents Society, the top honor for a male student at Nebraska.

Following in his father’s footsteps to teach and coach, he received a Bachelor’s in math, a Master’s in education, and became the “grad assistant” on coach Bob Devaney’s first staff in 1962. Having decided to leave a coaching career and enter dental school, Harry made space for, as he liked to joke, “some guy named Osborne.”

His senior year he met the love of his life, Ann Marie Hanna of Valentine. They were married in 1962.

Harry graduated from dental school in 1966, he and Ann lived in Honolulu, Hawaii, for one year so he could extern at Queens Hospital before moving back to Lincoln. He practiced general dentistry for 40 years in University Place. Patients still recall how he would call the evening after a procedure to check on them.

Harry lived life to the fullest. He could get more out of a day than most. He loved God, a quiet spot to fish with a friend, a sunny day doing yard work and an evening watching a favorite movie. Spending time with his Gourmet Club of more than 40 years and attending

A Memorial Service will be held at 11 a.m., Monday (5-3-2021) at First Plymouth Congregational Church, 2000 D. St. Lincoln, NE. Face coverings are required. Cremation/No visitation. Memorials may be given to the UNMC College of Dentistry, via the University of Nebraska Foundation, 1010 Lincoln Mall, Suite 300, Lincoln, NE 68508 or First Plymouth Congregational Church, 2000 D Street, Lincoln, NE 68502. Livestreaming and condolences online at Roperandsons.com.