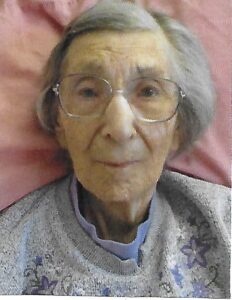 Iva Louise (Boring) VanWinkle, 92, of Sabetha, Kansas, formerly of Humboldt, Nebraska, passed away on Sunday, April 25, 2021, at the Apostolic Christian Home in Sabetha, Kansas.  She was born on December 20, 1928, in rural Humboldt, Nebraska, to Walter and Anna (McGinnis) Boring.  Iva attended Dawson schools and graduated from Dawson High School with the class of 1946.  Following graduation, she attended Business School in Omaha, Nebraska.

On November 11, 1947, Iva was united in marriage to Kenneth VanWinkle.  To this union, two children, Jerry Wayne and Peggy Ann were born.  The couple lived around Dawson throughout their married life, where Iva was active in the community.  She was a member of Rebekah’s Crescent Lodge #134 in Humboldt.  Kenneth passed away in 2004, and Iva lived in Humboldt, Nebraska, before moving to Sabetha, Kansas, where she was a resident of the Apostolic Christian Home.  She is preceded in death by her parents, husband Kenneth, brothers: Hugh, Lawrence, Donald, Norman “Mike” and Clayton Boring, her sister Lucille and sons-in-law John Lee and John Manley.

Funeral Services will be held at 10:30 a.m. on Thursday, April 29, 2021, at the Wherry Mortuary, 207 N. Nemaha Street in Humboldt, Nebraska, with Clayton Lundstedt officiating.  Interment will follow services at the Heim Cemetery in Dawson, Nebraska.

Condolences can be shared online at www.wherrymortuay.com