Joe Henry Godemann Jr. born July 15, 1928, and called to his eternal home on March 11, 2021, after a brief residency at the Tabitha Harbor House in south Lincoln.

Joe was born on the farm 3 miles north of Falls City to Joachim H. and Eleonora F. (Schmidt) Godemann. He was preceded in death by his wife of 54 years, Kay-Ann Godemann (Schreiber), brother Dennis Godemann, sister Dorthy Wittrock and grandson, Nathan Kneifl.

Joe was baptized at S 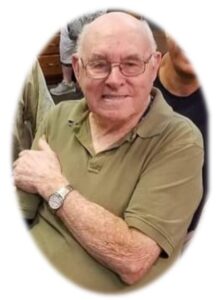 Joe farmed on the family farm with his father, Joe Sr., until he entered the US Army in January 1951 and served until 1953 in the Korean War, where he received the Korean Service Medal with 3 Bronze Stars and the United Nations Service Medal. After returning from the service, he resumed farming with his brother, Glenn, for the next 40 years. Early in his farming career, Joe suffered a farming accident resulting in the loss of his right arm. Despite his disability, he continued to farm and consistently approached life’s obstacles with resolute determination. Joe was a lover of animals and nature and was always eager to help those less fortunate. After retiring from farming, he worked for 1000 Adventures Campgrounds at Sycamore Springs, KS. Joe moved to Big Lake, Missouri and was actively involved in the Big Lake community advocating for community improvements and local recreation. Never to be idle or without purpose, he later

He will be remembered as that one-armed man who never met a stranger and always had a story to tell. He would visit with anyone who would listen. He would start a nail in a 2X4 by licking the end, then slamming it into the wood by the palm of his hand. He was a master improviser, able to operate or maintain any piece of farm equipment despite his disability. His pliers and diagonal cutters were his right hand. While he worked hard, he was always willing to give a helping hand and continuously advocated for what he believed in. A determined 90-year-old advocating for social acceptance while insisting everyone deserves a second chance.

Joe has chosen to donate his body for the advancement of medical education and research to the Anatomical Board of the State of Nebraska. In honoring Joe’s wishes, there will be no memorial service. A celebration of life will be held at a later date. Memorials or condolences in his honor may be dropped off or made through Dorr & Clark Funeral Home of Falls City, NE, for future designation by the family.