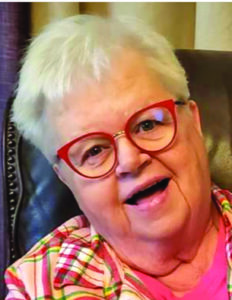 Sharon Kay (Hogue) Koch, 76, of Dawson was born on May 29, 1944, in Humboldt, Nebraska to Clifford and Velma (Pettit) Hogue. She was raised with her family in Dawson where they owned and operated the Dawson Café.  Sharon received all of her schooling in Dawson and graduated from Dawson High School with the class of 1962.  On November 10, 1962, Sharon was united in marriage to James “Jim” Koch at St. Mary’s Catholic Church in Dawson.  To this union four children, Stephanie, Stacey, William “Bill” and Kevin were born.  The couple began their marriage living in Falls City before moving to Dawson where they have lived the rest of their married lives.  Sharon enjoyed spending time with her family, especially her grandchildren and tending to her flowers.

A Memorial Mass will be held at 10:30 a.m. on Saturday, March 13, 2021, at St. Mary’s Catholic Church in Dawson, Nebraska with Father Kenneth Hoesing and Father Michael McCabe officiating.