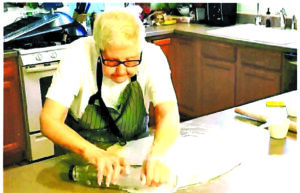 Dolly June (Rowell) Bridgmon passed away peacefully on March 3, 2021, in Tucson, AZ, at the age of 94. She was born in Barada, NE, the youngest of 18 children born to Evert and Stella (Mount) Rowell. She married Everett Wilson Bridgmon on April 12, 1944. After his three years of service as a Morse Code operator in the Army Airforce stationed in India, the couple lived briefly in Kimble NE and Falls City NE, and then settled in Omaha NE and raised their son, William. In 1983 they retired to Falls City, where they lived until relocating to Tucson, AZ in 1998 to be near their son and his family. Dolly longed for her home in Falls City and returned annually as often as possible for the Rowell family reunions every third Sunday in August. Family was the most important thing to Dolly, and she loved and kept track of everyone she could.
Dolly was a homemaker extraordinaire, and her homemade chicken and noodles were the stuff of legends. She was like an original Iron Chef: she could make a meal from three hot dogs, two parsnips, maple syrup, and a watermelon in under 60 minutes! She could teach Master Classes in sewing, crocheting, embroidery and needlepoint, many of which were gifted to family members. In retirement, Dolly and her husband enjoyed making woodwork and stitchery crafts.

Dolly was preceded in death by her parents, her infant son Dennis Lee in 1952, her husband in 2002, her son William in 2008, and her grandson, Jason Reed Bridgmon, in 2018. She was also preceded in death by her seven sisters: Alice, Manilla, Mabel, Opal, Velma, Phyllis, and Bernice, and ten brothers: Jay, Ervin, Melvin, Ralph, Victor, Aaron, Harold, Dorand, Ward, and Lloyd.
Dolly is survived by her daughter-in-law, Pamela Sue Bridgmon, her granddaughter, Whitney Anne Hodam, a granddaughter-in-law, E. J. Millstone, and four great-grandsons: Bryan Millstone, Andrew Bridgmon, William and George Hodam, all of Tucson. She is also survived by hundreds of nieces and nephews, great, great-great, and great-great-great nieces and nephews.

A graveside service for Dolly Bridgmon will be held on Monday, March 15, 2021 at 1:00 PM at Harris Cemetery, Barada, NE
The family plans a Memorial Service/Reunion Picnic to be held in Falls City in the summer of 2021.
Arrangements by Dorr and Clark Funeral Home in Falls City, NE.
www.dorrandclark.com