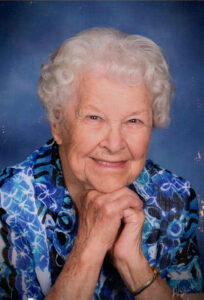 UVerna Frye Lorenz passed away peacefully on Tuesday, February 23, 2021 in Falls City, Nebraska. She was born on June 24, 1917 to Edward & Ella (Dunn) Rodgers in Elbing, Kansas. The family relocated to Reserve when she was a child. She lived most of her life in Reserve, Kansas.

She married Thomas Samuel Frye on February 1, 1942. After his Service in the U.S. Army they settled in Reserve, KS and raised 6 children. Mr. Frye passed away in 1974.

UVerna was preceded in death by her parents, her husbands, a son, Roger; three sisters and a brother.

A Celebration of Life will be held at 11 a.m.  Friday, March 12th at the First United Methodist Church in Falls City, NE.  Pastor Young Je Kim will officiate.

In lieu of flowers, the family requests memorial contributions to First United Methodist Church of Falls City and may be sent in care of the funeral home, 124 S 7th St., Hiawatha 66434.

The service will be livestreamed thru the funeral home facebook page: