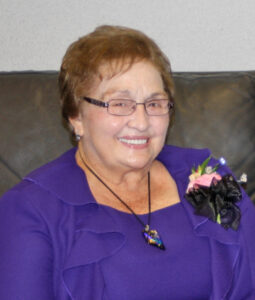 Leatha Yvonne (Randall) Schawang of rural Falls City, age 83, went to meet the Lord on January 5, 2021.  She died peacefully at home in the company of her husband and oldest daughter.

Yvonne was born on July 19, 1937, at her grandmother’s home on the Iowa Reservation near White Cloud, Kansas, to Elmer Randall Sr. and Leatha (Joslin) Randall.  She grew up along the Nemaha River on the Iowa Reservation, attending one-room country grade schools and graduating from the Reserve, Kansas High School in 1955.  On April 5, 1956, she married Earl Schawang at Immaculate Conception Catholic Church in Rulo, Nebraska.  They established their home on the family farm east of Falls City where she lived the remainder of her life, nearly 65 years.  In that home they raised their children, Kathy, Sandra and Randy.  During the children’s school years, Yvonne was the librarian and school secretary at Sacred Heart’s grade school.  She was also employed at Falls City Hardware, the Charlie Smith Ford dealership,  Koster’s Porta-Pen, Northview Oil, and was the office manager at Falls City Care Center.  She retired in 1999 to spend more time with her grandchildren, and also occupied her time by helping at the Catholic Bingo nights and frequently visiting the nearby casinos. Her retirement also gave her time to frequently visit her children in their homes, and she was able to travel the country and the world.  Favorite trips included Ireland, Italy, Israel and the Bahamas, as well as a train trip through Western Europe and a sea cruise from California to Florida through the Panama Canal.

Yvonne was a member of Sts. Peter and Paul Catholic Church in Falls City, a former president of the parish Altar Society, and was an active member of Sacred Heart’s Home and School Association.  She was a member of the Iowa Tribe of Kansas and Nebraska, and in her later years she took classes in the native Baxoje language and culture.  She was a founding member of Falls City’s Red Hat Society, and up until her final year, she enjoyed monthly lunches and outings with her Red Hat friends.  As her children were growing up, she was a Girl Scout leader and an assistant leader of the Peppy Misses 4H Club, where she specialized in teaching knitting.  She was an accomplished seamstress and cake decorator, and a generous cook of comfort food.  She enjoyed playing card and board games with all generations of her family, and she loved animals, especially her dogs,  Lucy and Cocoa and the departed Pebbles.

Yvonne is survived by her husband, Earl Schawang of the home, her daughter Katherine Perkins, also living at the family home, her daughter Sandra Schawang of Kill Devil Hills, North Carolina, and her son Dr Randall Schawang and his wife Melinda of David City, Nebraska.  Also surviving her are grandsons, Dawson Schawang and Hayden Schawang, step-grandson Joe Peterson, step-granddaughter Jenna Didier and her husband Ryan, and great-grandchildren Derek and Mackenzie Didier.  She is also survived by many cousins, in-laws, and nieces and nephews who were very special to her.  She was preceded in death by her parents,  a stillborn daughter Elizabeth Ann Schawang, her brother Elmer Randall Jr and his wife Joan, her stepfather Sam Randall, and her special aunt and uncle, Emmaline and Harold Meugniot,  Also preceding her in death were many more relatives and in-laws who were a great influence on her life.

A family only Mass of Christian Burial will be held at Sts. Peter and Paul Catholic Church on Saturday, January 9, 2021 at 11:00 AM with Father Lawrence Stoley as the presiding priest. Interment will be in Falls City Catholic Cemetery.

A Parish Rosary will be recited on 10:00 AM at Sts. Peter and Paul Catholic Church on Saturday 1 hour prior to service time.

Open visitation and viewing will begin on Thursday afternoon at Dorr and Clark Funeral Home.

In lieu of flowers, the family prefers memorials to Sacred Heart School or to the Richardson County Humane Society.