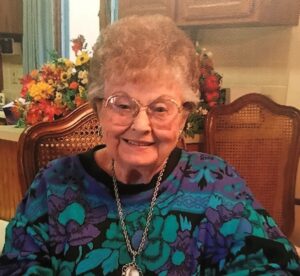 Jacquelyn “Jackie” Louise James, 95, of Berne, IN, passed away on December 26, 2020 at Swiss Village. Jackie was born on October 2, 1925 in Falls City, Nebraska, the daughter of the late John and Mildred (Dye) Frehse.

At the age of four she moved with her parents to Humboldt, NE. Jackie attended the Humboldt Public Schools from 1931-1943. In her Senior year (1943) she was chosen War Bond Queen of the Richardson County Fair. On December 25, 1944, she was united in marriage to Dwaine James at Hiawatha, KS. The couple established their home on a farm northeast of Humboldt. Mr. James died in a farm accident on November 14, 1986.

Jackie was an active member of the First Christian Church in Humboldt where she had been a Sunday School Teacher, a group leader of the CWF, a choir member, and a deaconess. She was very pleased with the plaque she received from the church for 60 years of friendship and support. She was a hard-working farmers wife and an awesome cook. She made pie almost everyday for many years and her and Dwaine churned lots of homemade ice cream. Jackie was a loving mother, grandmother, great- grandmother and great- great -grandmother. She was also a very caring person. She spent a lot of time in the Hallmark stores searching for just the right card to send to friends and family for whatever the occasion (birthday, anniversary, illness, etc.). She also loved her “Huskers”. She did a lot of coaching from the living room while watching Nebraska football. She usually has her TV turned on to anything that had to do with every kind of sport. In 1990, she moved to Berne, Indiana to be near her daughter, son-in-law, and their family. Jackie’s family meant everything to her. Nothing brightened her day more than a visit from her grandchildren, great-grandchildren, and great-great-grandchildren. She loved being around the little ones. Jackie attended the First Missionary Church in Berne after her move from Nebraska to Indiana.

She was preceded in death by her husband, parents, parents-in-laws, sister, brothers-in-law, sister-in-law, and grandson Kyle Smith.

The family will be having a private service at Downing and Glancy Funeral Home, 100 N. Washington St. Geneva, IN on Thursday, December 31, 2020. Jackie will be taken back to Nebraska for burial beside her husband in the Humboldt Cemetery.

Due to the COVID-19 pandemic, the family will be holding a celebration of life service at a later date at the Humboldt Christian Church, 427 Central Ave. Humboldt, NE.