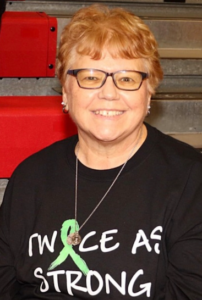 Karen Sue Mezger, 69, of Table Rock, Nebraska was born on February 9, 1951, in Nebraska City, Nebraska to Carl A. and Alice A. (Crow) Schneider. Karen was the youngest of five children, having four older brothers. She attended kindergarten through 7th​ ​ grade in Peru and then attended 8th​ ​-12th​ ​ grade in Auburn, graduating from Auburn High School with the class of 1969. Karen went on to college at Peru

State College to study Home Economics Education, where she ended up meeting the love of her life. On

May 13, 1972, Karen was united in marriage to Richard Barry Mezger at the United Methodist Church in Auburn, Nebraska. To this union four children, David, Thomas, Matthew and Katherine were born. The couple began their marriage living in Omaha before moving to Carlstadt, New Jersey, where her husband was born and raised. They lived there for two years near Richard’s family before moving back to Table Rock, Nebraska in 1974 so Richard could join her father and brother, Gary, in operating SM&S Salvage. Karen finished her degree at Peru State College and began her teaching career as a Home Economics teacher for Dawson-Verdon public schools until 1979.  She took a break from teaching full-time to raise her children from 1979-1995. After encouragement from John Eickhoff, then Principal of D-V Schools, she returned to Dawson-Verdon as guidance counselor in 1998 and completed her Masters of Science in Education at the University of Nebraska at Kearney. Karen would later transfer to HTRS public schools in 2004, when the districts consolidated, as high school guidance counselor until retiring in 2020.

She became a member of the United Methodist Church of Table Rock when she moved to town. She spent many years volunteering as a Youth Group sponsor and using every opportunity to teach youth about the importance of making good life choices. She was a member of the Table Rock Community Club, Table Rock Development Board, Table Rock Historical Society, United Methodist Women’s Group, Table Rock Women’s Group, and her favorite ladies M&M Group. During college at UNK, she became a member of Chi Sigma Iota for counseling, Kappa Delta Pi honor society for educators, and Delta Kappa Gamma for women educators.

Throughout her guidance counselor career, Karen made it a point to be at, involved in, or often in charge of every student activity. She understood the importance of supporting the community and building relationships. Even after a student graduated, she truly cared about and kept track of their personal endeavors. All she asked was that they do their best to be good people.

Karen loved her family more than anything. She never left out her mother, husband, children, grandchildren, or long-time family friends from any activity or life event. When Karen met someone, she liked they became friends or personal acquaintances for life. She thoroughly enjoyed reading, gardening and yard work, sewing, cooking, decorating for every holiday, and later in life she and Rich spent as many weekends as possible camping at various campgrounds, often with her friend, Joan Dreier. She always had a smile and positive attitude through every circumstance. She believed there was no such thing as a bad person, just bad choices that could hopefully become lessons learned.

Karen lost her hard-fought battle with cancer and went to be with her Lord on Wednesday, December 16, 2020, at the Pawnee County Memorial Hospital in Pawnee City, Nebraska having reached the earthly age of 69 years, 10 months and 7 days. She is preceded in death by her parents, parents-in-law Ernest and Alice Mezger and sister-in-law Janet Schneider.

A Celebration of Karen’s Life will be held at 2:00 p.m. on Tuesday, December 22, 2020, at the United Methodist Church in Table Rock, Nebraska with Pastor Dorothy Smith officiating. Masks and social distancing will be required throughout services for those attending. A live radio broadcast will be available on FM station 88.7 for those attending and wish to listen to the service from their vehicles. A live-streamed video broadcast will be available on the Wherry Mortuary/Monument Facebook for those unable to attend in person.

Following services, the Celebration of Karen’s Life will continue with a “Drive Through Memory Lane” that will begin at church and process through a 45-minute journey past Karen’s favorite spots of Southeast Nebraska.

Visitation on Monday, December 21, 2020, is open to public and will be held from 9 a.m.-8 p.m. at The Tiger Pride Activity Center (Old Table Rock School), 608 6th​ ​ Street in Table Rock, Nebraska with family greeting friends from 5:30-7:30 p.m. Masks and social distancing will be required and those attending will be asked to enter the school through the Main Entrance on the east side of the building.

In lieu of flowers, memorial contributions may be given to the Karen Mezger Student Supplies Fund and all contributions including backpacks, coats, gloves, shoes and school supplies can be dropped off at ALL