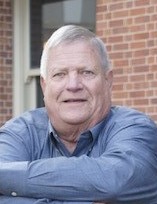 Long-time Falls City business owner and community leader Bill Simon passed away peacefully Wednesday morning, Dec. 2, 2020, at Bryan West Hospital with his family by his side. He was 67.

A devoted father, brother and friend of many, Bill was the fourth generation Simon to own and operate The Falls City Mercantile, as he succeeded his late father, Clarence, in 1989. He was also an active member of Sts. Peter & Paul Catholic Church, a generous benefactor to FC Sacred Heart School, and a steadfast presence at either the card table inside the Elks Club or in the middle of the fairway (and top of the leaderboard) at the Falls City Country Club. Bill captured more Men’s Club Championships, 13, than any other golfer in the club’s history.

William Patrick Simon was born Oct. 23, 1953 at Falls City to Clarence and Frances (Morrell) Simon. The youngest of five Simon children, Bill was named after Clarence’s life-long friend and golf partner, William “Bill” Schock. He first became familiar with the golf course by caddying for his dad and Mr. Schock. Young Billy’s initial interest in the sport didn’t involve long balls or birdies. As Mr. Schock recalled, immediately after each of the 18 holes was carded, the young caddy would request an update. “How much you owe me now, Bill?,” he’d ask. More times than not for the next nearly six decades, “Long Ball Bill Simon” did the collecting after the ball rattled in the cup.

Bill – or “Billy” – spent his formative years riding and showing horses with the Falls City Saddle Club, played little league baseball, and enjoyed sportsmen’s outings. It was a childhood not unlike those depicted by artist John Falter on the covers of the Saturday Evening Post. He attended Sacred Heart and graduated with the class of 1972. Excelling at most athletic endeavors, his true love for football earned him a scholarship to Kearney State, where he represented the Lopers as a fullback during the years of 1972-75. What he lacked in height, he made up in strength, and was noted to have an uncanny knack for being around the ball. Kearney is where he would form life long friendships, and would meet his best friend, Greg Brandt.  After college, Bill returned home to work for his dad at The Merc. Beginning as a semi-truck driver, eventually earned a desk next to Clarence, where he worked to generate new business and maintain existing customers in the Nebraska-Kansas-Missouri area. Bill likened success to to that of his father.

In 1978, he would court the love of his life, Cecilia Burton, then a student at the University of Nebraska at the time. She accepting his offer to go on a date on the condition he teach her how to play golf. The two were married on May 23, 1980. They raised four children in Falls City, where they were guided by the principles of the Catholic Church and attended FC Sacred Heart. Bill donated much of his time officiating football games, keeping time in the press box at Jug Brown Stadium with his brother Mike, and directing operations at track meets. He often likened himself to Emerial Lagassie in the kitchen, cooking shrimp for the highly anticipated annual shrimp feed. He served as a lector and cantor at early morning Mass and his spiritual practice never wavered. He not only donated his time to Sacred Heart and St. Peters & Paul, but monetarily gave generously to Sacred Heart, with future generations in mind.

He was preceded in death by his parents, Clarence and Frances Simon; mother-in-law, Mary Burton; brother, John Simon; and brother-in-law, Jim McNeely.

In lieu of flowers the family prefers memorials be made to family choice for later designation.

A Private Family Mass of Christian Burial will be held on Saturday, December 12, 2020 at 2:00 PM at Sts. Peter and Paul Catholic Church. Interment will be in Falls City Catholic Cemetery.

The service will be livestreamed on the churches Facebook page  https://www.facebook.com/sppfc and also broadcast on 88.7 FM near the church. Friends may park at the church and watch the livestream or listen on the radio and then join the family on the procession to the cemetery for the committal service. Please be mindful of distancing rules at the cemetery.

A private family rosary will be recited on Saturday at 1:00 PM at Sts. Peter and Paul Catholic Church.