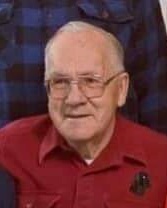 Rex L. Strickland, age 87, formally of Cozad, passed away on September 24, 2020, at Christian Homes in Holdrege.

Rex was born August 18, 1933, at Moorefield, Nebraska to Edward and Bertha (Pearson) Strickland. The youngest of seven children. The eighth being Jackie Sue. Rex attended school at Cozad.

On December 10, 1952, Rex married Janice Gutschow at North Platte, Nebraska. Following their nuptials, the couple resided in Lexington before making their home in Cozad in 1962.  Rex worked at the hay mills in Darr and Cozad before eventually came to work at Monroe Auto Equipment Company for many years until he had to retire due to health.

Rex loved to spend time fishing in the early years taking his kids with him. The kids would use the old cane poles to fish with at the sandpits South of Cozad.  Rex also loved hunting ducks, pheasants and deer.  He loved the deer hunting the best as he and his brother Dewey (from California) and his grandsons would accompany him and Dewey to their favorite spot at Willow Island for years and years. He bought his grandsons their first high powered rifle as a graduation present for deer hunting.

Rex was active in keeping track of his grandchildren in all the sports they were active in by either attending or sitting at his desk listening to the radio to hear how their games came out and reading the newspaper for their stats.  He would attend most of the hometown football games and wrestling tournaments. but he let Janice run after grandchildren so he could keep the dogs, chickens and the ducks company and tinker around the acreage. One time he left Dawson County to go Lincoln to State Wrestling to watch a grandson that was in the finals. Rex’s loved his family and all the grandchildren and his great-grandchildren as they were important in his life.

Memorials are suggested to the family for later designation. Berryman Funeral Home is in charge of arrangements.