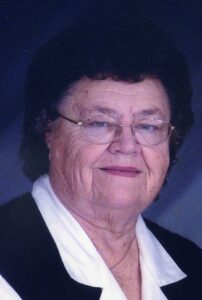 Darlene moved with her family to Peru, Nebraska, in 1934, where she attended Peru Normal School.  In 1945 the family moved to the Nemaha Bottoms and she attended Larkin Country School through the 8th grade and the Nemaha High School, graduating in 1950.  Darlene helped her Dad farm using mules and later tractors.  She also worked in Auburn.

On February 21, 1954, Darlene was united in marriage to Dean Volker at Trinity Lutheran Church. 1n 1956, Darlene and Dean moved to the Hawxby Farm near Nemaha.  Throughout Darlene’s life, they would live there, being blessed with four children: Darrel, Darla, Duane, and Diane.  Throughout the years, in addition to raising her children and running the household, Darlene worked side by side with Dean on the farm using their red equipment.

When she had the time, Darlene loved to sew and became a wiz at patching jeans.  She was known to wear out a deck of cards by playing solitaire.  Darlene also loved to travel to many Rodeos, watching the family rope, wrestle steers, and barrel race.  Darlene and Dean enjoyed square dancing as well.

As a member of Trinity Lutheran Church, Darlene played the organ for the church and was a member of LWML.  She belonged to the Champion Extension Club for many years and was 4-H Leader as her kids grew.  She also was a Nebraska Elections Poll Worker for more than 26 years.

Darlene developed Diabetes and battled the complications associated with the disease over the years.  In February of 2020, she was admitted to Good Samaritan Society-Auburn.  When the family was unable to visit her at Good Sam because of the Covid-19 Pandemic, they made the decision to move her home to care for her with the help of Darla and Samantha and Hospice Care. Back at home, she enjoyed reading the daily paper, watching game shows on TV, and looking at pictures and other memories of her life.

On Monday, September 21, 2020, Darlene passed away at home with family around her.