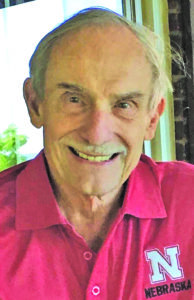 Dick was born in 1934 in the front room of the home of his parents, Wilbur and Emma Schock, on Chase Street in Falls City (His only sibling, Connie, was born in the same room three years later). He was a three-sport athlete at Falls City High School before leaving for Lincoln to earn his engineering degree at the University of Nebraska. After graduating, Schock accepted a position with the Army Ballistic Missile Agency based in Huntsville, Alabama, where he worked under famed rocket scientist Wernher von Braun, known still as the “father of the U.S. space program.” Schock followed von Braun to the newly-formed National Aeronautics and Space Administration, where Schock led a team of engineers tasked with mitigating shock and vibration issues within the Saturn V rocket, which was then being modified to safely lift the massive Apollo command module and lunar module from earth’s atmosphere. (The Saturn V remains the most powerful rocket ever built.) For his work, von Braun personally awarded Schock NASA’s Sustained Superior Performance Award.

When the Apollo program was discontinued, Schock, a charter member of the Marshall Space Flight Center in Huntsville, became the lead engineer for the Systems Dynamic Lab in developing the Space Lab within the Space Shuttle payload bay. Subsequently, Schock was co-investigator of the Solar Array Flight Dynamics Experiment, which flew on the Space Shuttle in 1984. That solar array concept was the design chosen for the four solar arrays (which combined are half a football field) that continues to power the International Space Station to this day.

For his pioneering work with the U.S. space program, as well as his efforts to educate the next generation of scientists, Schock was inducted in 2015 as the 22nd member of the Falls City High School “Wall of Fame.”

After retiring, Dick became a dedicated volunteer, specializing in making homes more accessible and safe by building wheelchair ramps and weatherizing homes. He helped students design model rockets and bridge trusses at Huntsville’s Space Camp. While visiting Falls City from Huntsville (where he lived for more than 50 years), Schock several times spoke to civic groups as well as science-class students at FCHS.

As an avid sportsman, he raced sailboats in Muscle Shoals, backpacked and camped in Colorado, fly fished in Durango’s Animas River, and skied in National Standard Races at Snowmass and Jackson Hole.

Services will be held at a later date when it is safe for large gatherings. In lieu of flowers, the family would appreciate donations to the Alzheimer’s Association.