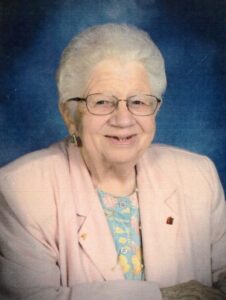 Virginia graduated from Beatrice High School in 1954. On January 30, 1955, she married Marvin Pethoud in Beatrice. Marvin passed away on December 13, 2008.

They moved to Aurora, Colorado, in 1959, where Virginia was employed at Lowry’s Air Force Base.

In 1972 the family moved to Mitchell South Dakota, where Virginia was employed at the Johnson Furniture store.

In 1974 they moved to Sioux Falls, South Dakota, where Virginia worked at the VA Hospital until moving to Falls City in 1975, where she and Marvin purchased the Hested Store, later named the Falls City Department Store. They also opened the Falls City Shoe Store and Falls City Men’s Clothing Store.

Virginia worked at the office of doctors, Couse and Slominski then went to work for FmHA until retirement in 1998. Virginia was a member of the First United Methodist Church.

Preceding her in death were her husband, Marvin; her parents, Kenneth and Marjorie Pelton; brother, Keith Pelton, and son-in-law, Ken Allen.

Funeral Services will be held at 10:00 AM, Friday, August 28, 2020, at First United Methodist Church in Falls City, NE, with Pastor Young Je Kim officiating. Graveside services will be held at 3:00 PM, Friday in the Evergreen Home Cemetery, Beatrice, NE. Visitation with the family greeting friends will be 7:00 to 8:00 PM, Thursday evening, August 27, 2020, at the church. A memorial is established to the family’s choice with the mortuary in charge. A guestbook is available online at www.harmanwrightmortuary.com Harman-Wright Mortuary, Beatrice, in charge of arrangements.