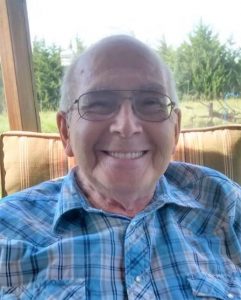 John Vernon Picton, 78, of Falls City, died May 7, 2020, at a Kansas City, Missouri Hospice. He was born on the family farm near Hamlin, Kansas, one of two children born to the late Everett and Ruth (Hinton) Picton. John attended country school near Hamlin prior to graduating from Morrill High School in 1959.
John married Wylene (Fritz) Picton. To this union, a daughter Carol was born before Wylene and John divorced. He later married Rose (Ivey), which ended in divorce as well.
John was a true patriot and enlisted with the U. S. Navy in 1963, discharged at the rank of AMS3 in 1967, after serving during the Vietnam War aboard the USS Kittyhawk aircraft carrier. After the Navy, he attended school to study metal fabrication and was later employed for McDonald Douglas in St. Louis, MO, before returning to the Richardson County, Nebraska. He then started Picton’s Body Shop, which he operated for several years before selling and starting work for Flair Fold Manufacturing in Hiawatha. John worked there a number of years until it closed and took employment with Armstrong Cabinet Factory in Auburn, Nebraska, to work there until he retired.
Survivors include his daughter Carol Vroom (William) of Gower, MO, a sister Eleanor Stover of Sabetha Kansas; two grandchildren: Jessica (Picton) Scott (Jake), and Cody Beckner, great-grandson Collyn Scott, all from Falls City, aunt, Mildred Appleoff-Marsh of Falls City, and multiple cousins.
John was preceded in death by his parents.
Friends may call at Chapel Oaks Funeral Home in Hiawatha after 10 a.m. until 4 p.m. Monday.
Private family graveside services are planned for Tuesday, May 12, at the Hamlin Cemetery. Pastor Charles Musil will officiate with military honors to be courtesy of the Falls City Ceremonial Unit.
Memorial contributions are suggested to the Alzheimer’s Association sent in care of the funeral home, 124 S 7th St., Hiawatha 66434.
Due to the critical situation our country is in, please remember the family during this difficult time. Consider sending a card or a note on our web site www.chapeloaksfuneralhome.com