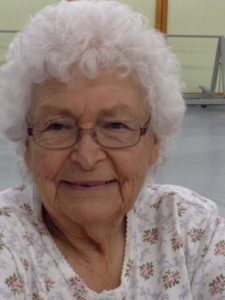 Lura Arline (Arnold) Herr, 94, a life-long resident of Richardson County, passed away Monday, March 30, 2020, at Methodist Hospital in Omaha. Lura was born June 8, 1925, on the family farm two2 miles south of Barada, Nebraska, the fifth child and only daughter of Nick and Nellie (Dunn) Arnold. She attended grade school at District 24, the Arnold school, on the corner of her parent’s farm. Upon completing her time there, she moved on to the Barada school and eventually the Falls City high school, where she graduated in 1942.

Upon completing high school, she went to Peru (NE) State Teacher’s College, where she earned her one-year Rural Teaching Certificate. In the fall of 1943, she began teaching at District 81, the Silver Creek school in Richardson County, where she would be for the next three years. At that point, she was offered the teaching job at her “home” school, District 24, the Arnold school. She taught there for two years. During those years, she attended summer school in Peru and earned her two-year teaching certificate, which would allow her to teach in town schools. In the fall of 1948, Lura moved to Humboldt and began teaching in the Humboldt public school system. She taught there only two years, however, as, in those days, married women could not be teachers, and she had met Osmer Herr, a local farmer, whom she married on June 11, 1950, at the Humboldt Methodist Church. To this union were born two daughters, Nancy and three years later, Jorene. When the girls were old enough, Lura was their 4-H leader.

As was customary for farm wives in the 1950s and 1960s, besides raising her girls, Lura raised a large garden and loved to be in the outdoors. Most springs could find her wandering the Barada Hills for morel mushrooms and her summers planting, weeding, harvesting, and preserving the bounty of her garden. Lura was active in her community. She was known to be there whenever a family member or neighbor needed help, often driving elderly members of the county to medical appointments in distant cities. She was nominated for and honored to receive the Knights of Aksarben’s “Good Neighbor of the Year” award in 1982. Her church was dear to Lura. She was active in the United Methodist Women’s (UMW) organization, holding various offices, and was the Sunday school superintendent as well as a long-time teacher of Sunday School classes. In the days before there was a UMW, she was a member of the Wesleyan Service Guild for which she was president for several years. She lived on the family farm about 5 miles northwest of Humboldt from her wedding until the autumn of 2004 when she and Osmer moved to Humboldt in order to stay in town over the winter. Osmer passed away the following summer, one day short of his 90th birthday.

Lura is survived by her daughters, the Reverend Nancy (Jim) Phillips of Omaha and Jorene Herr of Humboldt, two granddaughters, Kelli (Scott) Brandt of Nebraska City and Julie (Terry) Frampton of Omaha, two great-grandsons, James and Levi Brandt, and many nieces and nephews.

There will be a private interment. Memorial service details will be announced later.

Memorials may be made to the Humboldt United Methodist Church or the Bruun Memorial Library of Humboldt.