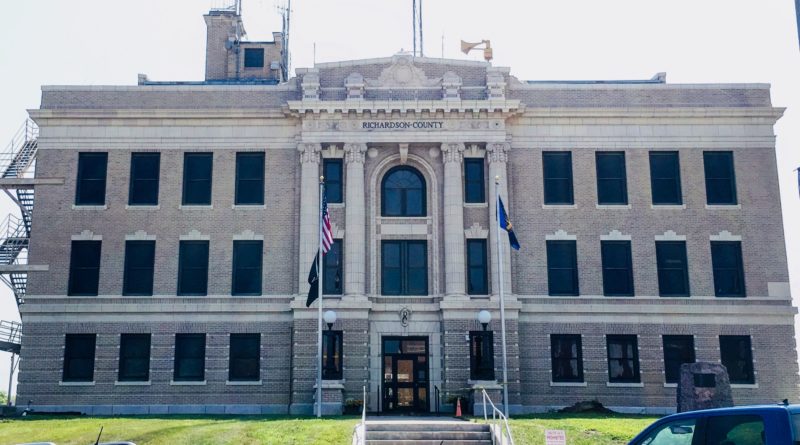 During the regular meeting of the Richardson County Commissioners, Commissioners Terry Frank, John Caverzagie and David Sickel voted to close the Richardson County Courthouse to the public, effective Tuesday, March 24, at 5:00 p.m. The motion was made after hearing from members of the Courthouse staff, Sheriff Rick Hardesty Jr., and Emergency Management Director Brian Kirkendall.

Sheriff Hardesty opened the discussion telling the Commissioners that the Sheriff’s Office had limited on-site visits and locked the outside doors, using the intercom system to allow people into the building when needed.

“We’re trying to limit contact with whoever, whatever as much as possible,” said Sheriff Hardesty.

The Sheriff said that traffic through the office has died down outside of gun permits, and they are encouraging video monitor visits to the prisoners. The procedures were implemented on Friday, March 20, after a confirmed case of COVID-19 in Nemaha County.

“We’re trying to do whatever we can to ensure that our residents and staff are safe,” said Sheriff Hardesty.

The Sheriff indicated that due to the action put into place by Governor Ricketts, that it helps them with VIN inspections.

Governor Ricketts issued an executive order acknowledging the restrictions in place to limit the spread of COVID-19. The Governor extended driver licenses and vehicle registrations expiring on or after March 1. The extension applies to all driver licenses, state identification cards, permits, or other credential issued by the Nebraska Department of Motor Vehicles.  Customers will be able to renew credentials online; in order to reduce the number of individuals requiring in-person assistance.  This step will assist with social distancing and lessen the need for people to travel to driver licensing offices. Any vehicle title requirements, registrations, in-transit tags, or motor carrier temporary documents due to expire on or after March 1 will be extended until 30 days after the executive order is lifted. Any Nebraska penalties or interest associated with the late filing of quarterly returns for members of the International Fuel Tax Agreement (IFTA) will be waived. Monthly inspection and reporting requirements under the ignition interlock program will be provided a two-week extension period for all existing interlock customers.  Additional extensions may be available, as determined on a case-by-case basis.

The Sheriff said that if Richardson County has a confirmed case, then procedures for the Sheriff’s Office may change, but for the time being, it will stay limited access.

County Treasurer, Amanda Bartek-Young informed the commissioners that she had 60 people through her office since the day before.

“That’s sixty people who have been around twenty other people apiece,” said Bartek-Young.

Currently, her office is operating by only allowing two people in the door at a time so they can be kept six feet apart.

“There is nothing that has to be done right now. Nobody will be expired unless they were expired before March 1,” said Bartek-Young.

County and District Court will continue.

“We’re still having court. They’re implementing web access so that a lot of them don’t have to appear at the Courthouse, but the courthouses that are closed, the parties, if they want to come to the live court, they’re still able to come in. Somebody would let them in, make an appointment, call and things like that,” said Clerk of District Court Pam Scott.

Sheriff Rick Hardesty noted that all inmates that have to come to court have their temperature taken before they are brought into the Courthouse.

“If they have a fever, we’ll notify the courts,” said Sheriff Hardesty.

Clerk Magistrate, Nancy DeKlotz informed the Commissioners that the state has indicated that they want some employees to take some time off and work from home if possible. It was suggested that maybe the elected official and the deputy from each office chose to have one person stay at home to protect each other from contact, so someone is always available to work in the office.

Amanda Bartek-Young said it wouldn’t be fair to her staff to operate that way.

Staff members of the Courthouse explained that they didn’t want to close the Courthouse completely. They want to work; they only wish to limit access to the public if possible. They explained that other courthouses around the state have limited access and post numbers on the doors so people can call to be let in or make appointments.

At the time of the meeting, 54 Nebraska Courthouses were suspending public access. Two hours later, the number had gone up to 59 Courthouses, not including Richardson County’s decision.

“I think it’s a very serious deal. It’s something that they keep increasing and increasing. The only way they’re talking about keeping it from having more cases is by social distancing, and people can do things by phone calls and make appointments,” said Sheriff Hardesty.

Commissioner Sickel told the room that he had seen on the news that, “When this 15 day is up, we would go back to business as usual.”

Sheriff Hardesty informed Commissioner Sickel that during the Richardson County Health Board meeting with Dr. Tramp, Dr. Tramp talked about a peak being in the middle of May.

“He said we are looking at three to six months before it’s pretty much all cleared up, then we’ll still have isolated cases, and that’s if it doesn’t mutate.”

“Right now, I think we, you guys have an opportunity to be proactive and look out for your employees and yourselves and our community and close to the public,” said Kirkendall.

“You hired me as an Emergency Manager; you hired me to do the planning. What I’m worried about is if it does get widespread, are all of these employees still going to be healthy enough to where I can put them in a different job? I may have to recruit some people and put them in different jobs, and if they’ve been seeing the public for the last two weeks-I may have nothing,” said Kirkendall.

Sheriff Hardesty said it would be the same for the Richardson County Sheriff’s Department.

“There’s seventeen of us. If the numbers that Dr. Tramp threw out were thirty to forty percent of the population of Richardson County will be infected; five percent of those would be hospitalized; one to three percent would be critical, and of that one and a half to point three-four percent would be a fatality. So like I said, there’s 17-18 of us, as law enforcement we start losing cops. What do we do? I’ll have to start to deputize. The fact is that if this starts spreading-we get one confirmed case, by the time it’s confirmed how many people have been contaminated?” said Sheriff Hardesty. “We could go from one to sixty, pretty quick. With the numbers they were throwing out, they figured 80 to 100 people in Richardson County may be a fatality.”

“I do believe that’s the way to go at this point. Looking out for ourselves to do our jobs, plus looking out for our community-I believe we should be closed to the public, post phone numbers, and go that route,” said Kirkendall.

A motion was made by Sickel effective at 5:00 p.m. March 24, 2020, to suspend the public access at the Richardson County Courthouse due to the COVID-19 until further notice and to post on all entrance doors telephone numbers of each office for the public to contact the office in need to perform their business over the phone if possible, also post the County’s website address for persons to access in which most business within the Courthouse can be conducted through and  if not to schedule an appointment to perform such business that is otherwise not available through any other source with that office.  Motion seconded by Frank. The motion carried.

Driver examinations will not be conducted during this time by the NE Department of Motor Vehicles.  For further information on licensing questions, please call 402-416-2240.

County officials encourage citizens to use the online services available at the Richardson County website to cut down the amount of foot traffic in the Courthouse and to limit the opportunity for community spread.

For further resources, please visit the Richardson County website at www.co.richardson.ne.us  or the Nebraska Association of Counties’ website at www.nacone.org.