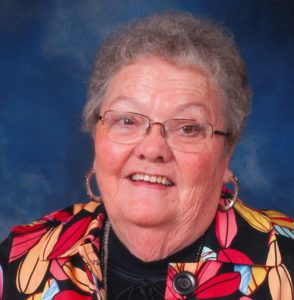 Avis was born at Horton, October 7, 1938, the youngest of two daughters born to Kenneth Charles and Wilma Evelyn Snyder Chesnut. Avis and her sister attended Union country school Avis to 4thgrade, Elizabeth until 6thgrade, upon which they came to ‘town’ and Avis graduated high school with the class of 1956.  Avis spent her working life at the ‘old’ Falls City Community Hospital where she was as an aide in labor and delivery.  Avis really enjoyed working as an assistant in the physical therapy department.

Mrs. Bailey was a longtime member of the First United Methodist Church in Falls City, and had been active in the UMW of the Church, enjoyed her time in the Red Hat Society, and a member of the Falls City Art Association.  Avis loved painting pictures for friends and family, using both watercolor and oil.  She sold Avon products for years, 31 Bags, and was a person that could sell ‘ice cubes to Eskimos!”

She was married to Victor Bailey at Falls City Christian Church, May 12, 1979.  They made Falls City their home all of their married life.   He died in 1981.  She was also preceded in death by her parents, and grandson Richard Lindstrom August 7, 2013.

A special message or remembrance may be sent to the family at www.chapeloaksfuneralhome.com