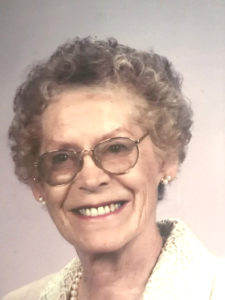 Eleanore Gansloser of Elgin, IL passed on July 6, 2019. She was born in Falls City, on August 9, 1923, to Steve and Dessie Bachman.  She will be missed by her children, grandchildren, relatives, and friends.  All loved by her.

Growing up on the farm near Rulo, during the depression and the early years of WWII imbued her with the philosophy and qualities of the “Great Generation”, which she and Chuck embodied through their lives.  She met Chuck Gansloser in Omaha where she was working and he was a soldier from Chicago stationed at Fort Crook (now Offutt Air Base). They married.  He was sent overseas, and she returned to Rulo until the end of the war.  They then set up home in Chicago’s south side where she was a stay-at-home mom.

She was preceded in death by her parents, her husband Chuck, son Michael, daughter Patricia Eurich (Dave, Elgin), and brothers John, Joe, and Eddie Bachman.

Burial was private and a celebration of her life will be held at a later date.