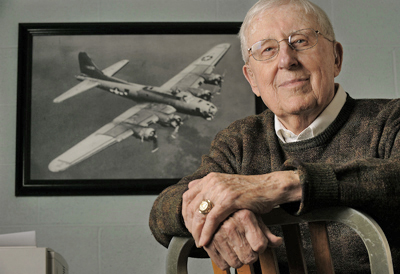 A lifetime resident of Richardson County, Bill graduated from Falls City High School and the University of Nebraska.

Following graduation, he worked for the Falls City Journal until entering service in World War II. Bill served five years in the Army and Army Air Corps. He was commissioned a second lieutenant and received his pilot’s wings at Roswell, New Mexico, in May of 1943. Bill became a B-17 bomber copilot, then pilot, and flew out of England with the 8th Air Force. He was shot down on his 25th mission over enemy-occupied Europe and became a German prisoner of war at Stalag Luft I on the Baltic Sea for a year and a month. Decorations include the Distinguished Flying Cross and the Air Medal with three oak leaf clusters.

Following his discharge from the service, he worked a year as a Richardson County service officer then rejoined The Journal as a sports editor. He married Dorothy Lucille Lunsford in May 1946, and they were married 62 years, until her death in 2008. Later he served as city editor, then editor and became publisher of the paper in 1973.

Bill has served on numerous boards; a member of the American Legion, Veterans of Foreign Wars, American Ex-Prisoners of war, and the Elks Club.

In his spare time, he enjoyed photography, golf, and World War II history.

Bill was proceeded in death by his parents; son, Scott Schock and sister, Marjorie  Loucks.

Funeral services were held on Tuesday, June 26, at the First United Methodist Church in Falls  City.

(Please turn to page 16 for Bill’s final Hanging out the Warsh; Obituary written by Bill Schock, headline by The Falls City Journal)