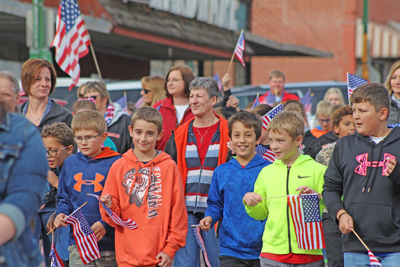 Falls City’s reputation for being the place to be on Veterans Day certainly went untarnished on Friday, Nov. 11. Every planned activity on a gorgeous autumn day went off like clockwork.
The day started with a coffee and rolls get together in the Commons at Falls City High, sponsored by FCHS students.
The morning’s program in the high school gym opened at 11 a.m. with the posting of colors by members of the Falls City Ceremonial Guard, with Color Guard Commander Larry Whalen in charge. The ‘Star Spangled Banner’ was played by the FC High and Sacred Heart bands, both directed by John Furrow.
The invocation and benediction were given by Fr. Thomas Dunavan of Sts. Peter and Paul Catholic Church. Emcee Kenny Simpson, Air Force Veteran and Commander of American Legion Post 102, welcomed the high schools and middle school students of Sacred Heart and Falls City Public.
“America Remember” was performed by the combined Music Departments of Falls City and Sacred Heart High Schools under the direction of Alisha Sutton and Paula Newhouse, FCHS and Sacred Heart music instructors, respectively.
An inspiring Veterans Day address was presented by Col. (Ret.) Charles R. “Chick” James, Falls City dentist, West Point graduate, and Vietnam War Veteran.
The celebration continued with a parade down Stone Street at 1:30 p.m. Participating were the marching bands from both high schools, color guards, students from the Falls City schools-many waving miniature flags-and motorcyclists from the area. Veterans from WWII, Korea, and Vietnam were chauffeured in cars provided by Hullman’s Ford and Armbruster Motor Co. Following the parade, a coffee and cookies reception was hosted by ShopKo Hometown.
Later that evening, Veterans and their guests were treated to a delicious meal at the First United Methodist Church. Ken Simpson again served as emcee, and Rev. Paul Weinert led the group in prayer. Servers were Middle School Fellowship of Christian Athletes, under the direction of sponsor Terri Hogue.
Col. James again was the evening’s speaker, presenting highlights from his morning address in off-the-cuff remarks. A highlight of the evening was the presentation of a “Quilt of Valor,” crafted by quilter extraordinaire, Peggy Davidson.
The beautiful , military-themed piece was especially made for Bill Schock, who accepted it on behalf of all veterans.
And that does it! What a day for area veterans!
June Bowers of the Veterans of Foreign Wars Auxiliary coordinated her group’s participation in the day’s activities and was in charge of the dinner and evening program.