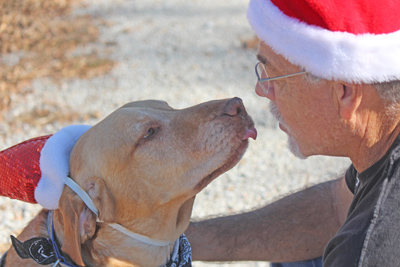 By Lori Gottula
The Falls City Jingle Bell Ride celebrated its 10th anniversary on Sunday, Nov. 13, by gathering its largest-ever collection of new toys for Richardson County’s needy children.
According to coordinator Sherry Huddleston, the equine-centered event drew more than 100 volunteers who rode horses or climbed aboard hay racks, and collected toys and other items from approximately 100 homes.
The event started at 11 a.m., when excited families gathered to participate in pre-ride activities that included jumping in two different bounce-houses, face painting, visiting with Santa Claus, riding on horses or a carriage, and eating soup (for a free-will donation.) At 1 p.m., the horseback riders saddled up, and all of the other volunteers climbed onto one of four different trailers, or Bob and Cathy Davis’s huge sleigh. The groups then split up and followed pre-mapped routes through the neighborhoods of Falls City. Each group was led by a golf cart or “mule,” and the horses were followed by pooper scoopers (kudos to the adults and children who volunteered for THAT job!)
Two hours later, the groups met back at Shopko with trailers full of toys. The volunteers were then dismissed to the Elks Club where they enjoyed soup and fellowship. (Elks board member Jake Smith graciously volunteered to open the building just for this non-profit occasion.) Every one of the toys collected Sunday will remain in Richardson County. The first distribution, for families who have applied through SENCA, will be held from 1:15-4:30 p.m. Thursday, Dec. 17, at the Humboldt Christian Church.
The communities covered by that distribution are Humboldt, Stella, Shubert and Dawson. The second distribution will be at Northridge Church (1820 Morton St.) on Friday, Dec. 18, from 9 a.m. to noon, or 1-4 p.m. The communities covered by that distribution are Falls City, Salem, Rulo and Verdon.
Applications have been available for several weeks now, and most families in the Health and Human Services program have already applied, but if you would like to apply, please pick up an application at the SENCA office in the courthouse, or by calling Huddleston at (402) 245-3191. Applications are due no later than Wednesday, Nov. 16.
Food donated by Northridge Church will be available at both distributions.
Huddleston, who has now coordinated the Jingle Bell Ride six times, will continue collecting toys until the distribution days. Others on the 2016 committee were: Cathy Davis, Jennifer Mumm, Kathy Mumm, Bev Chesnut (who founded the ride), and Melissa Hardenberger of SENCA. Bill Jensen of White Cloud, KS, served as Santa’s helper for the day, and Tish Radley and Larry Burlingame painted faces. The committee would like to thank Shopko for generously loaning a portion of its parking lot for this event, and the Elks for opening up afterward.
At the Elks Club, several volunteers received prizes for things such as “best dressed.” Prizes were donated by the Pizza Hut, A&G Restaurant, Rosie’s Breezy Hill, Mexican Grill Potrillos, the Chinese Buffee, and Frosty Queen.