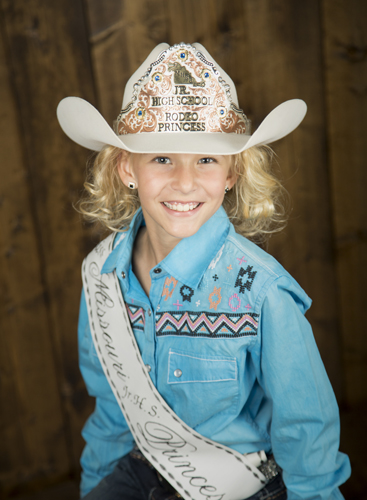 Photo of Ell Heineman by Nussbaum Photography.
By Lori Gottula
You can call her Miss Ella. Or Miss Missouri. Or Miss Princess. But whatever you call her, be assured that Ella Heineman earned the title of “Miss” a few weeks ago when she won the first-ever princess contest sponsored by the Missouri Junior High School Rodeo Association.
The pageant was held in conjunction with the rodeo state finals in Palmyra, MO, on May 21-22.The daughter of Russell and Lisa Heineman, of Falls City, Ella is 12 going on 20. Poised and eloquent, she is more polished than some people twice her age. When describing her stature, “tiny” is too big of a word. (She doesn’t weigh 90 pounds with jeans, boots and spurs on). But when she climbs into her saddle, she rides with the air of a queen. That ability is just one of the reasons that Ella swept most of the categories during the princess pageant.
She was nervous at first, though.
“I had never entered a pageant before, and thought it would be really competitive and serious,” Ella said. “But the other girls were a lot of fun and supportive, and I made some good friends.”
Ella and four other contestants spent several hours in front of a panel of five judges, competing in such categories as personal interview, speech, impromptu speaking, written test, horsemanship, personality and appearance. The last category was actually the toughest.
“Appearance is definitely important for the princess,” Ella said, “So we wanted everything I wore to match.  It took mom and me a few days to tie-dye my jeans to match my shirt.”  One effort was too dark, the next too light. But the pair finally got the color just right, and Ella wore turquoise blue from chin to toe (her cowboy hat was white.) She tied for first in the appearance category.
The next toughest event was impromptu speaking.
“The judges asked every girl the same question, and we had to answer right away,” Ella said. “The question was ‘If you were a brick in a building, where would you be? On the bottom, in the middle, or at the top?
“I said I would be at the bottom,” Ella said, “Because I like to support people.”
Smart girl. Apparently the judges liked her answer, too—or maybe they liked the sparkle in her eye when she said it—because she won the category. For her speech, she decided to talk about her first year in junior high rodeo in Missouri. She and her family had chosen the “Show Me” state because most of the rodeo locations were closer than the ones in Nebraska. Ella had a great time competing in barrel racing, goat tying, and pole bending. All three are timed events. In barrel racing, the rider completes a clover-leaf pattern around three barrels that are set up in a triangle. The barrels are at least 60 feet apart, and the horse is running at full speed. Some of the top junior high kids in the nation finish the pattern in less than 14 seconds.
“I don’t go that fast yet,” Ella said. “But I’m practicing.”
In goat-tying, Ella bolts out of the gate on horseback, with one end of the rope in her mouth, and the other end in her back pocket. She bales off of her horse when she reaches the goat. She tosses it onto its side, ties three of its legs together, then raises her arms in the air to show that she’s done.
“It’s really fun,” Ella said.
She just recently started competing in pole-bending, too, and thinks her horse, Levi, is a natural. (In pole-bending, the horse and rider weave among a line of poles, careful not to knock any over.)
“Levi weaves the poles really well,” Ella said. “He changes leads very smoothly.”
None of those events were part of the Missouri princess contest, though.  The only category on horseback was “horsemanship.” For that event, each of the contestants had to demonstrate her poise in the saddle while following a list of judges’ commands. Those commands included loping around the arena while carrying the American flag.
“It’s actually harder than it looks because the flag has to be held a certain way,” Ella said.
She must’ve made it look easy then, because she won that category, too.In the interview session, the judges asked a wide variety of questions, including the name of the celebrity rodeo star for whom Ella would most like to work. She chose Fallon Taylor.
“Fallon runs a progam called ‘what the helmet’,” Ella said. “She tries to get people to wear helmets while riding their events. Rodeo is a fast sport, and people do get thrown off of their horses. I just think it’s smart to compete with a helmet on. I always wear one when I run barrels.”
That was a first place answer.
The last two categories that Ella won were the “written test,” and “personality”  portions. The written test featured 50 questions about rodeo events and the MJHRA’s corporate sponsors.  The personality category was all about—well— personality. In other words, the character and individuality that each contestant showed as she competed in all of the other categories.
Ella’s personality won the judges over, and that comes as no surprise to this writer. During our interview, she showed a personality that would endear her to any judge. For example, when asked how often she practices,  she said, “I practice every day, whether it’s in the arena, or just riding my horse to make him stronger. But it’s doesn’t really matter how much you practice.
What matters is how much you want to practice.”
That was spoken like a true princess.  But that answer wasn’t a “miss” at all. In fact, it  was a very huge hit.