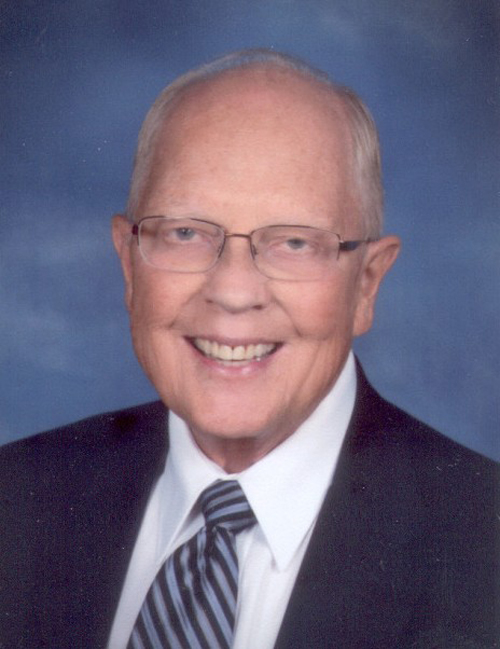 His funeral will be held at 10:30 a.m. Monday, June 8, 2015 at Christ Lutheran Church, with Pastor Daniel Gifford officiating. Interment will be in Steele Cemetery. The family will receive friends from 4-6 p.m. Sunday, June 7, at Dorr & Clark Funeral Home, Falls City. In lieu of flowers, memorials should be directed to Christ Lutheran Church, Falls City, American Cancer Society or family’s choice.

Rod was very involved with many civic and professional activities. During his career, he served as president of the Nebraska Bankers Association and was active in the Lincoln Jaycees, serving as their president and as State Vice President and Parliamentarian of the Nebraska Jaycees. He served on foundation boards of the Lutheran Family Services, Peru State College and the Vandeberg Family Foundation.

In addition to being the chief operator of FNB for many years and his four-year stint as Mayor (2006-10), Vandeberg was civically active and financially generous in a way unrivaled by anyone who came before him and set that bar astronomically high for the generations of people to come. He raised millions upon millions of dollars to make the new Falls City Library & Arts Center, FC Aquatic Center, Community Medical Center, FC High School and Fiedler Family Ballpark Complex projects happen. In each case, it was Vandeberg’s own personal sizable donations that started the wheels in motion, essentially turning pipe dreams into tangible projects. The library, swimming pool and hospital were all built during his time as Mayor.

But perhaps his biggest gift to the area was his help in getting a new Rulo Bridge constructed. In 2008 he was appointed to the Nebraska Highway Commission by former Nebraska Gov. Dave Heineman. That political clout allowed Vandeberg to ultimately deliver the community’s message to Washington, D.C.

On Jan. 25, 2015 Rod became one of just 40 persons enshrined in the Nebraska Jaycee Foundation Hall of Fame in Lincoln.

Rod was preceded in death by his wife, and brother, Bernard.